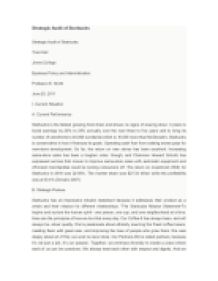 Strategic Audit of Starbucks Strategic Audit of Starbucks Traci Hall Jones College Business Policy and Administration Professor E. Smith June 20, 2011 I. Current Situation A. Current Performance Starbucks is the fastest growing food chain and shows no signs of slowing down. it plans to boost earnings by 20% to 25% annually over the next three to five years and to bring its number of storefronts to 40,000 worldwide which is 10,000 more than McDonald's. Starbucks is conservative in how it finances its goals. Operating cash flow from existing stores pays for new-store development. So far, the return on new stores has been excellent. Increasing same-store sales has been a tougher order, though, and Chairman Howard Schultz has expressed worries that moves to improve same-store sales with automatic equipment and off-brand merchandise could be turning consumers off. The return on investment (ROI) for Starbucks in 2010 was 22.50%. The market share was $27.33 billion while the profitability was at 30.4% (Donald, 2007). B. Strategic Posture Starbucks has an impressive mission statement because it addresses their product as a whole and their mission for different relationships. "The Starbucks Mission Statement-To inspire and nurture the human spirit - one person, one cup, and one neighborhood at a time. Here are the principles of how we live that every day: Our Coffee-It has always been, and will always be, about quality. We're passionate about ethically sourcing the finest coffee beans, roasting them with great care, and improving the lives of people who grow them. We care deeply about all of this; our work is never done. Our Partners-We're called partners, because it's not just a job, it's our passion. Together, we embrace diversity to create a place where each of us can be ourselves. We always treat each other with respect and dignity. And we hold each other to that standard. Our Customers-When we are fully engaged, we connect with, laugh with, and uplift the lives of our customers - even if just for a few moments. ...read more.

South and Central America produce the majority of coffee traded in the world. Starbucks depends upon both outside brokers and direct contact with exporters for the supply of green coffee. The supply of coffee is affected by weather conditions, and the health of coffee trees. An over-crowded market will give the coffee suppliers bargaining power. According to a 1996 Starbucks Case Profile, the price of the coffee bean could rise in the future due to lower supply, and heightened demand. For the industry, these are alarming threats. The quality of coffee sought by Starbucks is very high, and Starbucks has traditionally paid premium prices for its green coffee. There are no substitute products for the coffee beans Starbucks must buy. This is a potential threat to the company. Starbucks, however, has exhibited how little control its suppliers might actually have. In 2001, Starbucks announced new coffee purchasing guidelines, developed in partnership with The Center for Environmental Leadership in Business. These guidelines are based on the following four criteria: quality baselines, social conditions, environmental concerns, and economic issues. Only suppliers who can meet Starbucks' coffee standards will be able to supply the giant company. The supplying industry to Starbucks, therefore, has few companies. Starbucks will offset this threat by paying a premium of up to ten cents per pound of coffee to vendors based on how well their coffee meets Starbucks' standards. Starbucks has a degree of control over its suppliers in an industry where it is possible for suppliers of premium coffees to have an enormous amount of bargaining power (Kembell, 2002). D. Summary of External Factors External Factor Analysis Summary (EFAS Table): Starbucks | External Factors | Weight | Rating | Weighted Score | Opportunities | | | | Global Operations | 0.10 | 4.0 | 0.40 | Co-branding | 0.10 | 5.0 | 0.50 | Mergers, joint ventures or strategic alliances | 0.15 | 4.0 | 0.60 | Product range diversification | 0.10 | 5.0 | 0.50 | Socially responsible | 0.10 ...read more.

Review of Mission and Objectives Starbucks has literally shaped the culture of America by altering what we'll pay for coffee, what we eat, where we meet and how people spend their time. Since Starbucks went public in 1992, it became part of the popular culture that extends "beyond the espresso machine to influence the films we see, CDs we hear and books we read." It definitely met its long range goal of becoming the most recognized brand of coffee in the world. Starbucks has expanded rapidly in number, averaging five stores opening every week, into the 2000s. In recent years however, its endeavor of expansion has been coming to a screeching halt due to the economic downturn. Faced with a rather difficult operating environment, Starbucks announced the closure of 900 under-performing stores since 2008. It's a part of initiatives that Starbucks has been taking to "enhance long-term fundamentals by slowing growth, controlling costs and investing in traffic-driving [strategy]."Turning the market around will be a gradual transition, but the long term outlook of Starbucks is positive as many investors would agree based on its current financial performance. Howard Schultz's ongoing drive to reinvent the way Starbucks does its business is another positive attribute to the company that enhances the future outlook of the company (Carmicheal, 2010). VI. Strategic Alternatives and Recommended Strategy It would be recommended that Starbucks differentiate themselves from the others in the market. The differentiation strategy would allow Starbucks to establish a clear difference between themselves and their competitors. They must create a perception that the customer is actually receiving superior value from a Starbuck's product that cannot be provided by Tim Horton's, Panera Bread or Dunkin Donuts. This can be accomplished by focusing on providing superior customer service and reinforcing the idea that they are providing the highest quality products in the industry. Differentiating themselves successfully from the competition will provide Starbucks with a competitive advantage and allow them to charge a premium for the products and services (Hunger, 2010). ...read more.