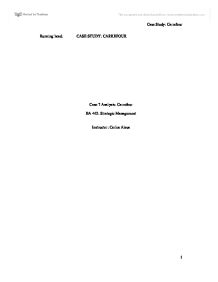 Running head: CASE STUDY: CARREFOUR Case 7 Analysis: Carrefour BA 462: Strategic Management Instructor: Carlos Alsua EXTERNAL ENVIRONMENT * GENERAL o DEMOGRAPHIC * Carrefour operates in 29 countries around the world. World population is rising, geographic distribution of populations is shifting, world population is aging rapidly, ethnic mixes in developed countries are changing rapidly, and average household incomes are increasing. * The demographic environment presents both opportunities and threats for Carrefour. Increases in population size and household incomes help to expand the market in which Carrefour operates. However, changes in the geographic distribution of populations, due to technological advances in communications, may cause difficulties for Carrefour in determining profitable locations for new storefronts. o ECONOMIC * In 2004, there was substantial economic growth due to near-record low interest rates in the United States, resulting in substantial growth in global trade. This growth was tempered by high oil prices. * The economic environment presents both threats and opportunities for Carrefour. Growth in global trade presents opportunities for Carrefour in identifying new products and services to offer to its customers. High oil prices, however, threaten Carrefour's profitability by increasing the costs of transportation for goods destined for Carrefour's warehouses and storefronts. o POLITICAL/LEGAL * Later on, it worked with financial or industrial partners only when national regulations made it necessary, as in China, Thailand, Malaysia, and Indonesia. (p. C 77) * Foreign ownership laws in Thailand allowed foreign companies-except American companies-to hold no more than 49 percent of the shares. Carrefour argued that this law would favor its rival, Wal-Mart. When the Central Retail Corp. sold its 40 percent shareholding in 1998, this law made it impossible for Carrefour to purchase the shares. (p. C 79) * [A]ll products within its stores were "halhal" in compliance with prevailing food requirements. (p. C 79) * Since 1992, foreign participation in retailing had been permitted through joint ventures with Chinese companies. ...read more.

(p. C 78) o Its relationship with Lianhua, one of the two major local retailers, helped Carrefour to establish its leadership in China. (p. C 80) * MANAGERIAL CAPABILITIES o Although primarily known as a hypermarket pioneer, Carrefour also operated supermarkets, hard discounts and other formats, such as convenience stores. (p. C 73) o Carrefour focused intensely on integration and repairing weak domestic sales and by the end of the year it had successfully repositioned itself to continue its international expansion at its historically fast pace. (p. C 74) o In order to fight back against the hard-discounters, Carrefour expanded its own hard discount chain, ED. (p. C 75) o Before entering a new international market, local conditions are analyzed against a set of socio-economic criteria. (p. C 75) o When we decided to set up stores in Romania, it was more an instinctive feeling than the results of the market study. (p. C 75) o Taking local constraints into account, Carrefour has added new services in developing markets, such as free shuttle services for customers and play areas for children, as well as home delivery. (p. C 76) o One important factor in cost management is its sourcing strategy. (p. C 76) o Shared processes and systems increase operational efficiency and the introduction of international product ranges complements its locally sensitive strategy. (p. C 76) o In 2002 Carrefour employed about 200 expatriate executives with solid experience of adapting Carrefour's retailing concept to local contexts. (p. C 76) o Local managers receive six months' training in a country of the region where Carrefour is already successfully operating. (p. C 76) o In Asia, department heads are much more autonomous than in France and are also in charge of recruiting employees and negotiating salaries. (p. C 76) o In China, Carrefour employs 95 percent of local Chinese managers and invests heavily in their training. ...read more.

Its strategy of cross-training expatriates with local managers helps to increase local responsiveness. Also, many Asian business operations require more autonomy than domestic operations. So, with Carrefour, there seems to be a combination of the multidomestic and global strategies. The use of this transnational strategy may help explain Carrefour's overwhelming success, in most cases, of opening new business operations in other countries. o ENTRY MODE * Carrefour has implemented the use of strategic alliances, at first, in entering new unfamiliar markets. Once Carrefour becomes more familiar with a market, it then rapidly expands its operations through the development of new wholly owned subsidiaries. This approach appears to balance the risk involved with greenfield ventures, with the lower returns associated with strategic alliances. Because this approach has proven successful in the past, I would recommend that Carrefour continue this approach in the future. CONCLUSION Carrefour has positioned itself as an international leader in the retail industry. Their strategies have proven successful for a number of reasons. First, they have been able to successfully transfer competencies to associates and managers across the globe. Also, they have been able to adapt to local cultures and consumer tastes as necessary. In some cases, they have even managed to change consumer tastes and buying habits. They have succeeded in entering new markets aggressively and gaining a large share of each market. Carrefour has even been able to restructure when legalities made it necessary. The question remains, then, what should Carrefour do in the future. Carrefour should remain in the retail industry. It should continue those practices that have proven successful and profitable in the past. Also, Carrefour should continue to leverage its knowledge of international markets to continue its rapid expansion across the globe. Carrefour should, however, be wary of threats to its operations, and remain vigilant in exploring new ways to improve its products and services. Carrefour has come this far based on its ability to pioneer new retail concepts and should remember that this pioneering spirit is what will carry it into the future. ...read more.