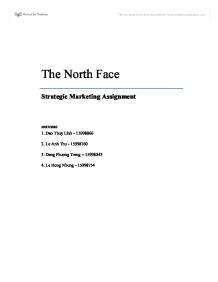 Strategic Mkt for the North Face

The North Face Strategic Marketing Assignment 10/27/2010 1. Dao Thuy Linh - 15998866 2. Le Anh Thu - 15998760 3. Dang Phuong Trang - 15998843 4. Le Hong Nhung - 15998754 Executive Summary The North Face is a company specialized in outdoor clothes, equipment for mountain climbers, backpackers as well as general campers. In addition to existing products, The North Face intended to introduce new product line: ski wears. To assess the transferability of the company's current critical success factors in the backpacking market into the skiwear industry, external analysis and internal analysis are conducted. Table of Contents Introduction 3 1. Internal Analysis 3 1.1. Mission 3 1.2. Critical Success Factors 3 1.3. Sustainable competitive advantages 4 1.4. SWOT analysis 4 2. External analysis 6 2.1. Macro trend analysis 6 2.2. Five force analysis 8 2.3. Conclusion from External analysis 10 3. Marketing Strategy 10 3.1. The top down approach 10 3.2. Potential market - ski wears market 10 3.3. Recommendations 10 4. Conclusion 11 Reference 12 Appendix A: The North Face Company's background 13 Introduction This report is the analysis on The North Face Company (For the overview of the company profile, please see Appendix A). It will take a look at internal as well as external environment for potential market: ski wears. In the internal analysis, the organization's mission, critical success factor, sustainable advantage competitive will be evaluated together with SWOT analysis. The North Face's external environment will be evaluated by using macro trend analysis and Porter's Five Force Model. Last, appropriate strategy for The North Face would be recommended. 1. Internal Analysis 1.1. Mission The North Face (TNF), Inc. is an outdoor product company specializing in outerwear, fleece, footwear, and equipment such as backpacks, tents, and sleeping bags. As we all believed, a business exists to serve the needs and wants of people, so does The North Face. The company was created to help explorers can easily reach their target by providing quality backpacking, technical mountaineering apparel and equipment. ...read more.

For more detail on number, see following table: U.S. Population from 1998 to 2015 Socio-cultural environment � Changes in Lifestyles: Consumers are becoming more active outdoors as can be seen with their increased participation in a variety of outdoors activities such as camping, hiking, and backpacking. A 1997 survey by the Travel Industry Association of America indicated that one-half of U.S adults, or 74 million people, have taken an adventure travel trip in the past five years. This is good news for ski wear market. � Dressing differences: The US has experienced a shift toward casual attire both at home and in the work place increasing the amount on money spent on such items. A growing number of employers have implemented casual dress days, which has significantly benefited the apparel industry. Economic environment � The fact that the U.S. economy as a whole has experienced modest inflation, low unemployment, and a booming stock market. The effects of these factors have trickled down to the apparel industry in the form of increased spending. � Rising income: Baby boomers are experiencing a rise in income associated with the bull market. Increased gain in personal income has led to an increase in personal consumption expenditures with individuals in higher income brackets spending more money. It is important to note that consumers are spending more in general but are very reluctant to spend significant amounts of money on one particular item. Pricing is very important to these savvy consumers and company now needs to create extremely sophisticated advertising mechanisms as a way to justify the increased expenditures. Technological environment The IT industry also includes companies which not only use, but, more importantly, design, build and supply the means for electronic commerce. Assemblage of computers, networks, software, and related computer services makes electronic commerce possible. TNF has done little so far to integrate its IT into the fast growing business-to-business (B2B) ...read more.

Reference Haberberg and Rieple (200)1: the strategic management of organizations, chapter 7 Leonard-Barton, D. (1992). "Core Capabilities & Core Rigidities: A Paradox in Managing New Porter, M. E. (1985), Competitive Advantage: Creating and Sustaining Superior Performance, New York: Free Press) Dan Butcher (November, 3, 2009), The North Face targets skiers, snowboarder with iPhone applications, viewed October, 22, 2010 http://www.mobilemarketer.com/cms/news/content/4552.html Appendix A: The North Face Company's background The North Face, Inc whose name refers to the most treacherous side of a mountain in the Northern Hemisphere was started in 1965 as a retail store by Doug Tompkins and is devoted to mountaineering equipment and supplies. Throughout the 70s and the 80s, the company was very successful, as its product innovation was the best in the industry. Its design of geodesic dome tents and synthetic bags set the industry standards for these items. During the late 1980s the company made a fatal move by entering the manufacturing side of the business. The company experienced a severe downturn leading to its acquisition by Odyssey Holdings International (OHI). Unfortunately for North Face, OHI declared bankruptcy in 1993 and North Face was sold at auction to J.H. Whitney & Company. Three years later the company went public. The company's problems have persisted throughout the late 1990s. Accounting problems plagued the company, which has led to consecutive financial restatements. The restatement for 1998 lowered previously reported earnings by 62%. Though the company is in severe financial difficulties, its customers seem to be somewhat oblivious to its misfortune. For the six months ending June 1999, sales rose 19% and in 1998 sales grew by 18.6%. North Face's product line consists of high-end outerwear, skiwear, and equipment for mountaineers. The company's goal is to increase brand awareness by projecting a high quality, technically sophisticated and authentic image that appeals to professionals and serious outdoor enthusiasts. North Face's products are sold primarily through specialty outdoor, premium-sporting goods. In 1996, the company introduced the Summit Shop concept, which is a store within a retail store dedicated to selling North Face products. ?? ?? ?? ?? 13 ...read more.