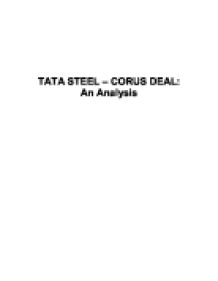 Tata Steel's B Muthuraman has defended the deal arguing that the enterprise value (EV) per tonne of capacity is not very high. The EV per tonne for the Tata-Corus deal is around $710 is only modestly higher than the Mittal-Arcelor deal. Besides, setting up new steel plants would cost anywhere between $1,200 and $1,300 per tonne and would take at least five years in most developing countries. The enterprise valuation of Corus at around $13.5 billion appears too steep based on the recent financial performance of Corus. Tata Steel is paying 7 times EBITDA of Corus for 2005 and a higher 9 times EBITDA for 12 months ended 30 September 2006. In comparison, Mittal Steel acquired Arcelor at an EBITDA multiple of around 4.5. Considering the fact that Arcelor has much superior assets, wider market reach and is financially much stronger than Corus, the price paid by Tata Steel looks almost obscenely high. Stock Market reaction Going by the stock market reaction yesterday, the acquisition is a big blunder. The stock tanked 10.5 per cent after the deal was announced and another 1.6 per cent today. Investors are worried about the financial risks of such a costly deal.Most of the leading stock brokerages have downgraded the stock while some have come out with recommendations to sell. While a majority of analysts are willing to concede that the acquisition makes strategic sense and may pay off in the long term, the consensus view is that stock price of Tata Steel would remain depressed in the short to medium term because of the higher financial risks. The first graph below shows the stock price performance during the deal and the second one shows till date. Investors, meanwhile, dumped Tata Steel shares with unrelenting fury in trading on the Bombay Stock Exchange, where the benchmark stock index fell about 1%. Tata Steel shares were pounded down 11%. ...read more.

Performance of Corus and ability of Tata steel to lower sourcing costs for Corus * Organic expansion through Greenfield projects by Tata * Post-merger integration and quashing of cultural issues Considering that global demand is on the increase and India will lead the domestic demand for Tata Steel, it can be safely said that the cyclicity of the steel industry will not go against the success of the merger. The steel industry will remain on top of the cycle for quite some time to come and this will enable Tata Steel to overcome the inertia of the merger and realize the expected synergies through increased efficiency of operation for Corus as well. It is crucial that Tata steel is unrelenting in its pursuit of expansion of capacity through organic methods like Greenfield projects. These projects will ensure that Tata-Corus will be in the top-3 steel manufacturing entities in the world by 2015. This would also ensure sufficient immunity against falling steel prices and the cyclicity of the steel industry. However, the raging cultural issues that lie beneath the surface of this merger could undo all the good work put in by the combine. However, the Tatas having faced similar problems with the integration of Tetley and having had a good track record in the past in post-merger integration would do a good job. So, based on the analysis Tata-Corus deal should be a success if they are able to successfully integrate Corus with Tata Steel and realize the projected synergies. Presently the market reactions and our analysis indicates a positive perception for the deal but only time will tell the actual outcome. Appendix 1) World Steel Output Global Steel output (in million tonnes) Country 2005 2006 % change China 355.8 418.8 17.7 Japan 112.5 116.2 3.3 US 94.9 98.5 3.8 Russia 66.1 70.6 6.8 South Korea 47.8 48.4 1.3 Germany 44.5 47.2 6.1 India 40.9 44.0 7.6 Ukraine 38.6 40.8 5.7 Italy 29.4 31.6 7.5 Brazil 31.6 30.9 (2.2) World production 1,028.8 1,120.7 8. ...read more.