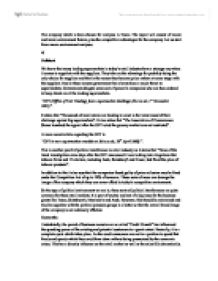 The company which is been chosen for analyses is Tesco. The report will consist of macro and micro environment factors, plus the competitive advantages for the company. Let us start from macro environment analyses. a) Political: We know that many leading supermarkets in today's retail industry have a stronger say when it comes to negotiate with the suppliers. They take on the advantage for probably being the only choice for suppliers and that is the reason they become price makers at some stage with the suppliers. Due to these reasons government has always been a major threat to supermarkets. Government delegate some sort of power to companies who are then ordered to keep check on all the leading supermarkets. "OFT (Office of Fair Trading) faces supermarket challenge (bbc.co.uk, 1st November 2005)". It states that "Thousands of small stores are heading to court in the latest round of their challenge against big supermarkets". It also states that "The Association of Convenience Stores launched the appeal after the OFT ruled the grocery market was not restricted". A more recent article regarding the OFT is: "OFT in new supermarket crackdown (bbc.co.uk, 28th April 2008)". This is another proof of political interference in retail industry as it states that "News of the latest investigation came days after the OFT announced it was looking into allegations that tobacco firms and 11 retailers, including Asda, Sainsbury's and Tesco, had fixed the price of tobacco products". In addition to this it also says that the companies found guilty of price collusion may be fined under the Competition Act of up to 10% of turnover. ...read more.

For instance, if Asda is trying to beat all of them on price, Sainsbury's will still maintain its market share with same higher prices but good quality. If Morrison's try to adopt different marketing strategies, Tesco will come up with "deals and value offers" which will keep them where they are. Tesco as we know is advancing in non food sector as well with some electronics, clothing, etc. However, Tesco faces some immense amount of competition in these already as Curry's, PC World and companies like Comet have already got name and high reputation in selling electronics. Potential customers will most likely go to these stores as they are specialists in electronics rather than buying it from Tesco. Similarly with clothing, M&S, Next, Gap and many others have a name in clothing sector. Hence Tesco might face some rivalry in such areas. Risk of Entry by Potential Competitors: Tesco, Asda, Sainsbury and other supermarkets put up considerable barriers to entry for the newcomers. Anyone starting up a new supermarket chain has barriers imposed on them, implicitly or explicitly, by the existing supermarkets. For instance, Tesco may have cornered the market for certain goods. The new supermarket will not be able to find cheap, reliable suppliers. Tesco also has the advantage of economies of scale. The amount it pays to the suppliers, per item, is a lot less than the corner shop. It achieves economies of scale through buying large volumes of goods. A small supermarket chain can only buy a relatively small volume of goods, at higher price. ...read more.

It may happen that the facts we take into consideration while undergoing a PEST for any organization may not be either assumed on certain criteria or they do not have any ground reality at all. - Another disadvantage which can be faced by the analysts is that PEST only covers the external environment, but the results need to be considered in accordance with other factors, such as the organisation itself, competitors and the industry in which it is operating. - In order to make the PEST more effective, it should be done on regular bases. We know the variables and figures we take into consideration change every day every moment for instance, law rules and regulations, perhaps inflation and foreign currency rates. - To gain the best results for the analysis it is necessary to know about the different perspectives which come from different people. This probably may not be possible in most cases because it will consume more time and it will incur high level of costs as well. - The frequency of the change in the macro environmental factors makes it even more difficult to anticipate developments that may affect an organisation in the future years. It means PEST done in January 2007, for example, will not be seen as equally accurate in mid 2007 or the year after. This is due to the everyday change in the corporate world. - It has also been argued that PEST is a list of simple factors which are not critically presented. These are some of the limitations which users might face while undergoing a PEST for an organization. However, yet PEST has its own merits which make the users use it. ...read more.