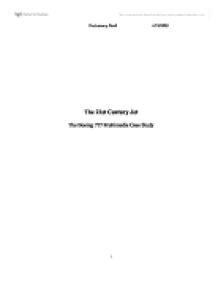 The 21st Century Jet The Boeing 777 Multimedia Case Study Abstract Multimedia case studies have been shown to be an effective way of documenting and teaching best design practices. This is a case study of the changes that the Boeing Commercial Aircraft Company made in the way they design and build airplanes. The 777 is the first jet that Boeing has created using this methodology. The changes were very dramatic and encompassed many areas, including technical, organizational and administrative changes. Boeing is touting the 777 as more than just a product, but as a new process. Although the technical innovations were numerous, what made the 777 project unique were the other changes Boeing instituted for this design/build effort. It was the first 100% digitally designed and pre-assembled airplane made by Boeing. Concurrent engineering, the concept of "Working Together", was an integral part of the new philosophy and nearly 240 Design/Build teams were used through-out the process. The teams included design, manufacturing, customer and supplier personnel from the start. Designing and building a new commercial jet airliner is a long, five to ten years, and infrequent, one or two per decade, process. As such, it is crucial to document the design/build process for future projects, especially one that had so many "firsts". A multimedia case study is an ideal vehicle for teaching engineers within Boeing as well as engineering students the design/build process of a large and complex product. This case study is also useful as an example of the process of changing an established system in a conservative company. ACKNOWLEDGMENTS Special thanks to Professor Agogino for suggesting the topic as well as providing guidance and support throughout the project. Thanks to the current BEST lab members who provided me with guidance in the preparation of the case study. And to all those previous BEST lab members, whose work was invaluable as examples of completed multimedia case studies. ...read more.

There has not been a substantial increase in flight speeds of commercial airliners, with the exception of the supersonic Concorde, since the original jet airliner, the Boeing 707. The design parameters are shifting from being performance based to being cost based. For example, on the 707, 50% of operating cost was fuel burn and 20% was cost of ownership, on the 777 those numbers are 18% and 62%, respectively. 5.0 The Changes The changes to the Boeing Commercial Aircraft Company encompassed all fields. From the philosophy of the company to the technical details, every aspect of the design/build process was or is being modified. 5.1 New Philosophy Boeing is touting the 777 as a new process not just a new product, a philosophy that is espoused by everyone from the top down. Cards worn on name tags were printed listing the mission, goals, objectives, and strategic initiatives for the Boeing Company and the 777 division. On the Boeing company 1992 card the mission statement is: "To be the number one aerospace company in the world and among the premier industrial concerns in terms of quality, profitability and growth." On the back side of the 777 division cards was this mission statement: " Working together to produce the preferred new airplane family." The thrust of this philosophy is summed up in the name of the first 777 delivered to United Airlines, "Working Together". A theme that runs throughout the case study is that even though a modern commercial jet airliner is a technology intensive product, designing and building it is still a human process. The human element kept creeping into the best intentioned plans. For example, the common CAD database meant that as soon as a designer released a drawing, everyone could access the design and modify their own designs to eliminate any problems. This led to the phenomena that no one released their drawing until the last possible moment for fear of criticism by others. ...read more.

"The Working Together concept was very dynamic," said United 777 Program Manager Gordon McKinzie. "Working closely with Boeing, we helped resolve hundreds of design elements". "The result is that the 777 is the exact plane we wanted, and we're proud to have been part of it." Boeing President Phil Condit commented regarding United Airlines: "Their input to the design process has clearly resulted in the right airplane, for the right market, at the right time." Condit notes that since the program was launched, the 777 has captured more than 75 percent of its market. The goal for the 777 program was to reduce the "noncomformance events" (parts that don't fit) by 50%; the actual reduction was 75-80%. An unanticipated benefit of working together was an education of the customer regarding the complexity of the design/build process of airliners. Phil Condit explains that by being involved in the process they understood that "some of their previous demands were difficult to accomplish and they compromised the product". Customer involvement worked much better than expected and they quickly became an integral part of the process. 8.0 Recommendations for Future Research To complete this case study, more research will have to be completed. As previously mentioned, a business perspective will add substantially to the content of the case study. Knowledge Based Engineering (KBE) use will be more widespread, not just at Boeing or aerospace firms but throughout industry. KBE applications at Boeing is another area that requires more research. Although KBE was used sparingly on the 777, Boeing is currently expanding its use in future programs like the Next Generation 737 transports. Much of the manufacturing work on the 777 and future airplanes will be done by entities other than Boeing all over the world. These partnerships are a crucial part of the success of building a huge product like a commercial aircraft. Managing those partnerships with the different corporate cultures and the process of transferring large amounts of design data amongst the partners is a research project within itself. ...read more.