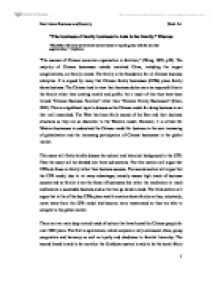 &quot;The business of family business in Asia is the family.&quot; Discuss

"The business of family business in Asia is the family." Discuss "The father who does not teach his son his duties is equally guilty with the son who neglects them." Confucius "The essence of Chinese economic organisation is familism," (Wong, 1985, p58). The majority of Chinese businesses outside mainland China, including the largest conglomerates, are family owned. The family is the foundation for all Chinese business enterprise. It is argued by many that Chinese family businesses (CFBs) place family above business. The Chinese tend to view their business duties more as responsibilities to the family rather than creating wealth and profits. As a result of this they have been termed "Chinese Business Families" rather than "Chinese Family Businesses" (Chen, 2001). This is a significant topic to discuss as the Chinese model for doing business is not that well researched. The West has been fairly scared of the East and their business structures as they are so dissimilar to the Western model. However, it is critical for Western businesses to understand the Chinese model for business in the ever increasing of globalisation and the increasing participation of Chinese businesses in the global market. This essay will firstly briefly discuss the cultural and historical background to the CFB. Then the essay will be divided into three sub-sections. The first section will argue that CFBs do focus on family rather than business success. The second section will argue that the CFB model, due to its many advantages, actually causes high levels of business success and so family is not the focus of businesses but rather the mechanism to reach and become a successful business and so the two go hand-in-hand. The third section will argue that at the of the day CFBs place wealth creation above family as they, reluctantly, move away from the CFB model and become more westernised so they are able to compete in the global market. ...read more.

In counterargument to the argument that high business success is the motive behind the CFB model because loyalty to the family is a very strong source of motivation and performance for the business. However, this also supports the argument for CFBs placing family before business success because they do this for the sake of the family. On the job, family members are willing to work very hard and put in long hours for the family rather than personal benefit. They are willing to accept lower pay than non-family and would take pay cuts for the success of the business for the family (Whyte, 1996). Redding (1995, p64) argues that "money becomes the only meaningful surrogate for security and the pursuit of wealth is only conducted rare passion." This implies that maybe business success may come before family commitments. However, Redding (1995) notes that the influences for this is firstly, gaining high status from conspicuous consumption of, such as the sales of Mercedes Benz or Rolls Royce cars. Secondly, due to their sense of responsibility for the building of family financial resources so the family name can be preserved with respect in the long term. This second section will argue that the CFB model, due to its many advantages, actually causes high levels of business success and so family is not the focus of businesses but rather the mechanism to reach, and become, a successful business and thus the two go hand-in-hand. Kao (1993) states that privately owned Chinese companies, most of which are outside China, make up the world's fourth economic power after North America, Japan and Europe. Whyte (1996) argues that the entrepreneurial behaviour expressed by the Chinese families in general is at least part of the driving force behind China's dramatically improved economic performance. Starting from a domestic base, some CFBs have become extensive MNCs. Prominent examples include Hutchinson Whampoa of Hong Kong, the Salim Group of Indonesia, Hotel Properties of Singapore, Formosa Plastics of Taiwan, and the Charoen Pokphand of Thailand (Tsang, 2002). ...read more.

The organisation is now managed by trained professionals of whom many are not ethnic Chinese. Many of the heads of CFBs now believe to become internationally competitive, CFBs must push for specialised and professional management, and in doing so place the profits of the company above family ties (Chen, 2001). Succession of the CFB has lost its link to family heritage and tradition and now an opportunity for further reorganisation and convergence with the practices of the West. This is vastly accelerated by the Western professional education now possessed by the heirs of the large conglomerate CFBs. The heirs return to Asia with knowledge and experience but more importantly have been given chance to break away from the traditional tight family network and launch independent ventures, and so placing individual achievement above that of the collective family (Chen, 2001). In conclusion, this essay has examined the case that CFBs main concern is the family and not of business prosperity and profits. This was evident as CFBs have many structures and methods of doing business that did not lend itself to maximising the success of the business. However, CFBs dominate the corporate world of Asia and so a paradox was created in how a business model that did not place success or profits as its main concern or motive has managed to become so successful and dominate the Asian markets. This was examined and argued that focusing on the family and traditional Confucius values led to extremely successful businesses. The family was a tool for business success and therefore CFBs did not place family above profit but used it as a mechanism for profit gains and therefore they went hand-in-hand. However, the essay concludes that in today's modern, global market, CFBs that wish to stay competitive and enter the increasingly Westernised and standardised business practices must move away from the CFB model. This is apparent and so concluding that CFBs do not place family above profit as when it comes down to it, CFBs are gradually converging to western practices for the reason of business success and profits. ...read more.