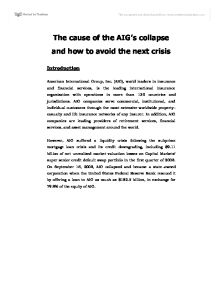 The cause of the AIGs collapse

The cause of the AIG's collapse and how to avoid the next crisis Introduction American International Group, Inc. (AIG), world leaders in insurance and financial services, is the leading international insurance organization with operations in more than 130 countries and jurisdictions. AIG companies serve commercial, institutional, and individual customers through the most extensive worldwide property-casualty and life insurance networks of any insurer. In addition, AIG companies are leading providers of retirement services, financial services, and asset management around the world. However, AIG suffered a liquidity crisis following the subprime mortgage loan crisis and its credit downgrading, including $9.11 billion of net unrealized market valuation losses on Capital Markets' super senior credit default swap portfolio in the first quarter of 2008. On September 16, 2008, AIG collapsed and became a state-owned corporation when the United States Federal Reserve Bank rescued it by offering a loan to AIG as much as $182.5 billion, in exchange for 79.9% of the equity of AIG. Analysis The collapse of AIG can be explained by the following internal and external factors. Internal Factors (i) Inadequate internal controls AIG Financial Products Corp. (AIG-FP) is a wholly owned subsidiary of American International Group, Inc. and founded in January 1, 1987. It was set up to branch out from AIG's core insurance business by creating a division focused on complex derivatives trades that took advantage of AIG's AAA credit rating. In 1999, JP Morgan, an investment bank, asked for insurance on its complex corporate debts and other mortgage-related bonds in case of default. As the company models showed that there was a 99.85% chance for AIG-FP would never have to pay on those kinds on insured contracts and the other side parties would have difficulty in demanding payment anyway, ...read more.

That was why the mortgage lenders were keen on offering subprime mortgages without requiring borrowers to evident they had sufficient incomes or savings o meet the initial and monthly payments. With the climbing property values, investment bankers invented increasingly complex and sophisticated securities backed by mortgage loans and trade them as with other bonds and stocks in the market. However, trading securities incurs risks. They are often highly leveraged, borrowing to make big bets on securities ranging from U.S Treasury bonds to risky securities backed by mortgages. Therefore, investment bankers could make credit default swap (CDS) contract with the financial guarantors like AIG to spread over the default risks on the securities. Credit default is a swap contract in which the buyer of the CDS makes a series of payments to the seller and receives a payoff if a credit instrument goes into default. It provides a default protection on assets tied to cooperate debts and mortgage-backed securities. These financial institutions sell insurances on bonds and guarantee to pay back investors fully if the bonds default. In order to make huge profits, they sold hundreds of billions of dollars in insurance contracts in the credit default swap market in which investors buy and sell insurance on a wide array of bonds and CDOs. Investors kept the money flowing into ever hotter and faster growing housing markets caused a housing bubble eventually. The housing price was diminishing and the property lost much values. A bubble develops when an asset's price becomes disconnected from its fundamental value. Mortgage lenders ran out of tricks for keeping monthly payment down. As credit condition weakened, mortgage lenders and investors grew less willing to take on the risk and subprime borrowers began defaulting en masses. ...read more.

The subprime shock showed how unbalanced things had become. It is up to regulators to set it right. (iv) Overhaul financial regulation The regulatory framework overseeing the nation's financial system needs a good overhaul. The current regulatory structure allowed the most aggressive lenders to avoid regulatory scrutiny. Regulators were also hamstrung in efforts to impose greater discipline on the industry given the difficulties coordinating among themselves. In the long term, the Treasury's plan proposes consolidation of the current regulatory structure into three principal agencies. The basic concept of regulation would shift; instead of agencies monitoring specific types of financial institutions, regulators would specialize in various types of risks and activities. The Federal Reserve would look out for the stability of the entire financial system; its mandate would include any risk that threatened the system, whether it involved banks or hedge funds. The Fed is uniquely suited for this task given its central position in the global financial system, its significant financial and intellectual resources, and its history of political independence. A second regulatory agency would oversee any financial institution receiving an explicit government guarantee. Lenders couldn't choose their regulator as they do now and would have consistent standards to work with. The third regulatory agency would aim to protect consumers by monitoring how all financial institutions market their products. Financial institutions and their products no longer fit in narrowly defined boxes. The risks they take cut across markets and extend around the globe. Conclusion If AIG disappeared, it could wipe out uncountable workers' nest eggs and create harmful ripple effects worldwide. Although the next financial crisis is not in sight, there is no question that another one will arrive eventually. Therefore, understanding the roots of the AIG shock is necessary to avoid or better prepare for the next financial crisis. ...read more.