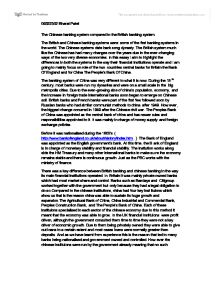 The Chinese banking system compared to the British banking system. The British and Chinese banking systems were some of the first banking systems in the world. The Chinese systems date back song dynasty. The British system much like the Chinese has had many changes over the years due to the ever-changing ways of the two very diverse economies. In this essay I aim to highlight the differences in both the systems in the way their financial institutions operate and I am going to mainly focus on role of the two countries central banks for Britain the Bank Of England and for China The People's Bank Of China. The banking system of China was very different to what it is now. During the 18th century, most banks were run my dynasties and were on a small scale in the big metropolis cities. Due to the ever-growing size of china's population, economy, and the increase in foreign trade international banks soon began to emerge on Chinese soil. British banks and French banks were part of the first few followed soon by Russian banks who had similar communist methods to china after 1949. How ever, the biggest change occurred in 1949 after the Chinese civil war. The Peoples Bank of China was appointed as the central bank of china and has newer rules and responsibilities appointed to it. ...read more.

(Heffernan, S 2005 Modern banking Jonh Wiley & Sons pg 305) The lack of regulation and control of private banks or too much regulation as others would argue and not getting the right balance of regualtion led to many failures in the UK. An example would be the small bank failures and liquidity problems they faced during 1991-1993. (Heffernan, S 2005 Modern banking Jonh Wiley & Sons) Britian saw a great rise in foreign investment and was going through a boom. With so many small and medium sized instiutions opening up specialising in property. Institutions would often lend out up to 125% mortgages which left the lender ad borrower with negative equity as time went on the loan book got greater then the deposits.( Heffernan, S 2005 Modern banking Jonh Wiley & Sons) The decline and speculative concerns grew and as a result the values of assets droped. As the small instituions played no role on the main economy as there was so many of them, together all of them collapsing would have a great impact. The bank of england had to step in to finance and bail out over 40 small firms from going bank rupt. The Bank of England did step in but it was a too late. Banks were given the option to either close down or increase their liquidity or decrease loans. ...read more.

In conclusion there is reason to believe that although the Bank Of Englands model is the base model for many other central banks around the world its lack of regulation and control is questionable. It is the bank of the government and the lender of last resorts. Comparing the chinese central bank and the responsibilities it holds and shows that the chinese model of banking where the state is controlling the majority of it is more succesfull in terms that there are more closely monitored as they are open to scrutiny if they show any signs of failure and as a result could loose their position as government. How ever some might argue that is so much state control and ownership that good. The British banking industry is booming with firms and as a result competition is tight resulting in the consumer getting a better deal where as the consumer in china is much worse off due to the lack of competition. Both economies are very different in the way they operate how ever they are both able to boast one similarity and that is they are still key players on the world stage in terms of their financial instituions and are still able to maintain their importance to the world economy as a whole. Bibiliography: 1. http://www.bankofengland.co.uk/about/history/ 2. https://www.bankofengland.co.uk/publications/workingpapers/wp139.pdf p16 p23 3. http://www.pbc.gov.cn/publish/english/966/index.html 4. Heffernan, S 2005 Modern banking Jonh Wiley & Sons 305p-315p ?? ?? ?? ?? 09322352 Bharat Patel ...read more.