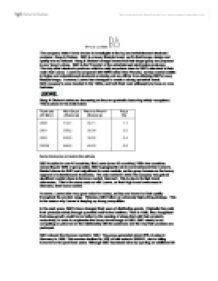 The company which I have chosen to investigate is the top end entertainment electronic producer, Bang &amp; Olufsen.

With nine countries accounting for 80% of group sales, B&O's geographic mix is more balanced than Loewe's. Market shares for B&O are insignificant in most markets, as the group focuses on the luxury segment of entertainment electronics. The only market in which the company has gained significant market share is its home market, Denmark. This is due to its high brand awareness. This is the same case as with Loewe, as their high brand awareness in Germany, their home market. However, Loewe offer very good value for money, as they are known for their quality throughout the product range. Whereas, B&O follow an extremely high pricing strategy. This is the reason why Loewe is keeping up strong competition. ...read more.

The group generated about 20% of sales in Germany in 1996. This number declined to 16% of total sales in 2000/01, due to falling turnover for the past three years. Although B&O increased sales by opening an additional 56 stores since 1997, the fall in turnover is due to the multi-brand retailers ending their co-operation with B&O. It was in 2002 when the company first experienced increasing sales in Germany since 1996. B&O is now confident with their German market. The number of stores has now increased to 66. B&O is present in over 40 countries worldwide, the largest being Germany, Denmark, the UK, the US and Switzerland. These markets account for nearly 60% of total sales, but this is less than Loewe which in their five largest markets they have about 75% of total sales. This is shown in the charts bellow: BANG & OLUFSEN LOEWE ...read more.