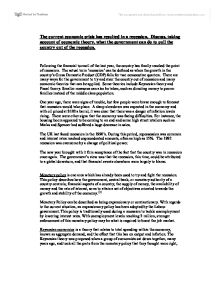 The current economic crisis has resulted in a recession. Discuss, taking account of economic theory, what the government can do to pull the country out of the recession.

The current economic crisis has resulted in a recession. Discuss, taking account of economic theory, what the government can do to pull the country out of the recession. Following the financial turmoil of the last year, the country has finally reached the point of recession. The actual term 'recession' can be defined as when the growth in the country's Gross Domestic Product (GDP) falls for two consecutive quarters. There are many ways for the government to try and steer the country out of recession and many economic theories that can be applied. Some theories include Keynesian theory and Fiscal theory. Smaller measures can also be taken, such as directing money to poorer families instead of the middle class population. One year ago, there were signs of trouble, but few people were brave enough to forecast that recession would take place. A sharp slowdown was expected in the economy and with oil priced at $100 a barrel, it was clear that there was a danger of inflation levels rising. There were other signs that the economy was facing difficulties. For instance, the housing boom appeared to be coming to an end and some high street retailers such as Marks and Spencer had suffered a huge decrease in sales. ...read more.

A Keynesian view of recession is that during this period, capital is not maximized. Unemployment rates are high and because there are less employees, capital is reduced. Fewer machines running in firms also means a loss of capital. If the loss of capital from idle machines is large enough, labour's marginal product will fall regardless of there being fewer workers. [4] Another main economic policy, seen as a contrast to the monetary policy, is the Fiscal Policy. The Fiscal Policy can be described as the use of government spending and revenue collection to influence the economy. [5] Fiscal policy focuses on government spending and taxation. The fiscal, like the monetary policy, works on both an expansionary and a contractionary basis, but it also takes a neutral stance. This stance represents equilibrium in the economy in which government spending is equal to tax revenue. By adjusting government spending and tax rates, the level of aggregate demand within the economy would rise. By tackling the crisis through a fiscal policy, objectives such as growth in the economy, full employment, and price stability can be achieved. The chancellor, Alistair Darling, is already employing some fiscal-like mechanisms to help boost the economy. In an attempt to pull the UK economy out of the gutter, Chancellor Darling is focussing on giving cash to the poorer families who need it rather than wealthier families who are less inclined to spend it. ...read more.

At the time of writing, it would appear that the governments of France and Germany are uncomfortable with British and US led policy, insisting that they will not sign up to any global agreements which may not be in their own best interests. As well as trying to regulate how countries trade with one another, Gordon Brown and his government must do all they can to encourage business enterprise at home. Unfortunately, despite all the billions that have been used to prop up our ailing banks such as The Royal bank of Scotland, (combined with the introduction of 'loan guarantee schemes' and reduced interest rates), our financial institutions are still reluctant to provide commercial loans. 'Confidence' at all levels of our economy is very low at present. Investors will undoubtedly try to wait until the market has 'bottomed out' before considering new ventures. For this reason, it is unlikely that any measures taken by the government are going to have any immediate effect. Instead, a long steady climb out of recession is more likely. In my view 'boom and bust' cannot be avoided in the open market, where longer periods of 'boom' will ultimately be followed by more acute and protracted periods of bust. ...read more.