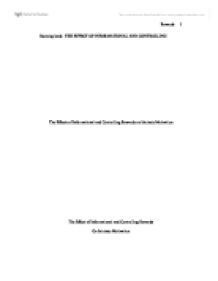 The Effects of Informational and Controlling Rewards on Intrinsic Motivation

Running head: THE EFFECT OF INFORMATIONAL AND CONTROLLING The Effects of Informational and Controlling Rewards on Intrinsic Motivation The Effect of Informational and Controlling Rewards On Intrinsic Motivation Sometimes rewards are not rewarding. Although it may be counter intuitive, sometimes rewarding a person for an inherently interesting activity actually results in decreased levels of interest in the very activity that the reward exists to encourage. Some researchers attribute this post-reward lack of interest to decreased intrinsic motivation while others hold behavioral explanations. While various researchers disagree as to exactly why the phenomenon exists, few dispute that it does. Rewards that have a detrimental effect on interest in an activity are typically controlling in nature and studies demonstrating the effect include: Anderson, Manoogian, Reznick, 1976; Deci, 1971; 1972; Deci, Koestner, & Ryan, 1999; Fabes et al., 1989; Garbarino, 1975; Greene & Lepper, 1974; Green, Lepper, & Sternberg, 1976; Harackiewicz, 1979; Kruglanski, Friedman & Zeevi, 1971; Lepper & Greene, 1973; 1975; Loveland & Ollely, 1979; McCullers, Fabes, & Moran III, 1987; McGraw & Fiabla, 1982. A reward often ends up decreasing a person's interest in the very behavior the reward exists to encourage. Conversely, when informational reward (i.e. praise) is used, it generally increases internal motivation which is demonstrated by increased interest in the praise activity. This experiment is concerned with the topic of motivation, specifically extrinsic motivation and how the introduction of the former might affect the later. Intrinsic motivation supposedly exists within a person. According to Deci, Benware, and Landy (1974) "A person is intrinsically motivated to engage in a behavior if he does it because the behavior itself is rewarding." On the other hand, extrinsic motivation originates outside of a person; Deci et al. continues: "...a person is extrinsically motivated if he performs the behavior in order to achieve some external reward." pg. 652. There is a great deal of research showing that informational rewards seemingly enhance intrinsic motivation resulting in raised levels of interest in an inherently interesting activity. ...read more.

In short, the more someone feels that he or she is in control, the more intrinsically motivated he or she will be, and vise versa. Informational rewards are rewards that represent feedback to an individual regarding the competency of his or her performance. Examples of information rewards would include praise for a job well done or a certificate awarding someone for a success. As long as the informational rewards give positive feedback they tend to enhance intrinsic motivation. According to Deci et al. (1999) this is because another factor underlying intrinsic motivation is the psychological need for competence. When a reward is positively informational it provides satisfaction of this need for competence and thus proceeds to enhance intrinsic motivation. In an attempt to test cognitive evaluation theory, Deci et al. performed a quasi experiment in which they hypothesized that children who had teachers with a controlling orientation would have less self-esteem and less intrinsic motivation that children who had teachers who were more supportive of autonomy. Their data supported their hypothesis concluding that rewards will tend to undermine intrinsic motivation and self-esteem when administered by someone with a controlling orientation, whereas they will tend to maintain intrinsic motivation and self-esteem when administered by someone who is autonomy oriented. Obviously in some cases rewards will have conflicting effects. Most will be to some extent both controlling and information with the two processes working against each other. In these cases other things must be taken into account when attempting to predict the effects of mixed rewards. Another theory that attempts to explain the effects of extrinsic rewards on motivation is Bem's Self-Perception Theory(1967). Self-perception theory asserts that just as we infer someone's attitudes or beliefs form their behavior, we infer our own attitudes or beliefs from our own behavior. For Bem, our behavior does not follow our beliefs, rather our beliefs follow our interpretations of our own behavior. ...read more.

On the other hand, in the praise condition, the lack of stimuli being present to signal availability of the reward increased the likelihood that the target activity would generalize form treatment to post-treatment conditions. Carton also claims that the operant theory has several advantages over the other theories surrounding motivation. First, he claims that operant explanations are more parsimonious. Second, he claims that operant theories are falsifiable. Thirdly, he claims that operant explanations work best in applied settings, and finally, he claims that operant explanations do not depend on definitional distinctions between "intrinsic" and "extrinsic" motivation A Brief Summary To summarize briefly, a plethora of research demonstrates a phenomena whereby praise (informational rewards) generally cause increases in interest in a rewarded behavior while tangible rewards (controlling rewards) generally cause decrease in interest for the rewarded behavior. Cognitive Evaluation Theory explains that when rewards are controlling, a person feels less autonomous which results in decreased motivation. However, when rear4ds are informational they enhance intrinsic motivation because this provides a person with satisfaction of their need for competency. Self-perception theory's "overjustification" hypothesis has another explanation for this phenomenon: a controlling reward given conditionally upon completion of a task, regardless of quality of performance would cause the person rewarded to perceive the task as only a means to an end, thereby stripping it of any inherent interest. An unexpected informational reward would not have a detrimental effect relative to the controlling reward because it would never effectively become a bribe. And finally, operant psychologists such as Esenberger and Cameron have another explanation for this phenomenon. They claim that controlling rewards (when given regardless of quality of performance) would facilitate learned helplessness which would result in decreased levels of behavior while informational rewards would facilitate learned industriousness resulting in increased levels of the behavior. In essence, when either controlling (tangible rewards) or informational reward (praise) is introduced into a situation the three theories presented here make basically the same behavioral predictions. ?? ?? ?? ?? Rewards 12 ...read more.