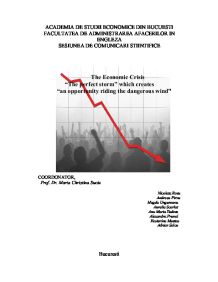 The Global Economic Crisis. The present project analyses different approaches of the crisis management in some of the most affected industries and countries. Moreover, the strategies used by some big companies and the measures some governments took durin

ACADEMIA DE STUDII ECONOMICE DIN BUCUESTI FACULTATEA DE ADMINISTRAREA AFACERILOR IN ENGLEZA SESIUNEA DE COMUNICARI STIINTIFICE The Economic Crisis "The perfect storm" which creates "an opportunity riding the dangerous wind" COORDONATOR, Prof. Dr. Marta Christina Suciu Nicoleta Rosu Andreea Pirvu Magda Ungureanu Aurelia Scarlat Ana Maria Tudose Alexandra Prunel Ecaterina Mustea Adrian Salcu Bucuresti PRESENTATION OF THE TEAM "We like having fun, but when it comes to work we try to do our best."1 ANDREEA PIRVU, 19 years old "I chose the introductory part of the project because I wanted to conduct a comparative research of the economic crisis, in order to find proper lessons that could be learned from the past." MAGDA UNGUREANU, 19 years old "I wanted to find out more about the root causes of the economic crisis and that was what inspired me to contribute to the introductory part." ADRIAN SALCU, 19 years old "I chose the case study about Greece because I was extremely impressed by their poor crisis management and I was also curious how they got in such a mess." ALEXANDRA PRUNEL, 19 years old "The reason why I decided to write about China was that I consider it to be a very good example for their way of handling the global recession." NICOLETA ROSU, 19 years old "I chose Groupon as my case study for I consider it a successful entrepreneurial model during economic constraints, which I would like to follow in my future career." ANA MARIA TUDOSE, 22 years old "I chose this case study for I found it interesting and appeals to the general interest of the public, by offering information on how things would evolve should Great Britain impose the scrap page scheme and therefore, inspire other countries to apply such measures for mitigating the economic crisis." AURELIA SCARLAT, 20 years old "I chose Carrefour Romania as my case study because I was interested in the measures they have taken during the crisis in order to make us feel the economic recession didn't affect our purchasing power at all." ...read more.

Industry: Here the Chinese wanted to focus on improving innovation and industrial restructuring and on supporting the development of the high-tech and service industries. Disaster rebuilding: Because of the earthquake which hit Sichuan Province on May 12, 2009, they wanted to speed the reconstruction on these areas. Incomes: In this area they made some significant chances that included raising the average incomes in rural and urban areas, increasing subsidies for low-income urban residents and increasing the number of pension funds for company employees and allowances for those receiving special services. The main purpose is to narrow the gap in living standards between rural and urban citizens (as well as between coastal and western regions of the country). For example, since February 2009, an estimated 900 million Chinese rural residents have been eligible to receive a 13% rebate for purchase of home appliances.6 Taxes: Extended reforms in the value-added tax rules to all industries, which could cut the tax corporate burden by 120 billion yuan (about 17.6 billion U.S. dollars) and allow all companies in China to deduct spending on capital equipment.7 Finance: The Chinese government has increased bank credit for priority projects, rural areas, and small businesses. They achieved this goal by transferring production to create economic efficiency through mergers and acquisitions. The Chinese government has made concrete investment with existent available money. We can say that China saved up for hard times and now, that the time has come, they can rely on their resources. "The world's Policemen might be Occidental but the world's teacher, as it has for millennia, still resides in the Orient."8 GROUPON - Case Study How Ideas Turn to Gold in Time of Crisis Barely an idea dating from three years ago, Groupon is now one of the biggest household names for worldwide markets. The startup Forbes called the "fastest growing company ever"9, Groupon is a "deal-of-the-day" website with annual revenues estimated at more than $2 billion10. ...read more.

Economically, the crisis put a heavy debt burden on Europe's economy everywhere in the European Union, even in Poland where the crisis was handled best. Together with the increasing social security needs due to the ageing population, the debt will put its weight on the public budgets. The differences in the severity of the crisis in the different countries can be attributed to the following factors: the condition of the housing market, the export dependency, the budgetary position and the size of the financial sector and its exposure to high risk assets. The concrete political consequences of the crisis are not clear until now. They are depending on the way the Union intervenes in order to safeguard the Greeks from bankruptcy. However, it seems already clear that at least the Euro-zone will get closer. Policy responses to the crisis The current crisis has demonstrated the importance of a coordinated framework for crisis management. It should contain the following building blocks: * Crisis prevention - to prevent a repeat in the future. This should be mapped onto a collective judgment as to what the principal causes of the crisis were and how changes in macroeconomic, regulatory and supervisory policy frameworks could help prevent their recurrence. Policies to boost potential economic growth and competitiveness could also bolster the resilience to future crisis. * Crisis control and mitigation - to minimize the damage by preventing systemic defaults or by containing the output loss and easing the social hardship stemming from recession. Its main objective is thus to stabilize the financial system and the real economy in the short run. It must be coordinated across the EU in order to strike the right balance between national preoccupations and spillover effects affecting other Member States. * Crisis resolution to bring crisis - to a lasting close, and at the lowest possible cost for the taxpayer while containing systemic risk and securing consumer protection. An orderly exit strategy from expansionary macroeconomic policies is also an essential part of crisis resolution. ...read more.