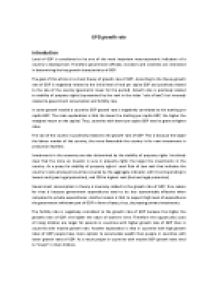 ﻿GPD growth rate Introduction Level of GDP is considered to be one of the most important macroeconomic indicators of a country?s development. Therefore government officials, investors and scientists are interested in determining the key growth characteristics of GDP. The goal of this article is to check theory of growth rate of GDP. According to the theory growth rate of GDP is negatively related to the initial level of real per capita GDP and positively related to the size of the country (geometric mean for the period). Growth rate is positively related to stability of property rights (represented by the rank in the index ?rule of law?) but inversely related to government consumption and fertility rate. In some growth models a countries GDP growth rate is negatively correlated to the starting per capita GDP. The main explanation is that the lower the starting per capita GDP, the higher the marginal return on the capital. Thus, countries with lower per capita GDP tend to grow at higher rates. The size of the country is positively related to the growth rate of GDP. This is because the larger the labour market of the country, the more favourable the country is for new investments in production facilities. Investments in the economy are also determined by the stability of property rights. Intuitively clear that the more an investor is sure in property rights the larger the investments in the country. As a proxy for stability of property rights I used Rule of Law rank that indicates the country's rank among all countries covered by the aggregate indicator, with 0 corresponding to lowest rank (poor legal protection), and 100 to highest rank (the best legal protection). ...read more.

The critical values are: DL= 1.55 DU=1.74.We decide whether there is autocorrelation from the test because the statistic is between 4-DU= 2.26 and 4-DL=2.45. The Breusch-Godfrey statistics with 1 lag is equal to 2.31 with corresponding p-value of 0.12. Therefore we cannot reject the hypothesis that there is no autocorrelation. 1. Disturbances are uncorrelated with regressors. The disturbance of the regression is the variance that is not explained by the model. There may be another regressors that are important for the model and explain the disturbances. In that case estimated coefficients are biased and inconsistent. However I am not awere of an economic theory that could add additional explanation to the possible correlation. Therefore I neglect this problem further. 1. The disturbances are normally distributed. In order to test that assumption I have conducted Jarque-Bera test. Jarque-Bera statistics amounts to 1.23 with corresponding p-value of 0.53. Therefore the hypotheses that the distribution of disturbances is normal should not be rejected. Test for the joint hypothesis To check the hypotheses that two coefficients GConsumption and R&L are equal to 0 we should use F test. The null hypothesis is GConsumption = R&L = 0, alternative hypotheses is that GConsumption 0 or R&L 0. F statistics totals to 5.23 with corresponding p-value amounting to 0.007. Therefore, we may reject the null hypothesis at 1% significance level. Conclusion The aim of this article is to understand what influences the GDP growth rate. I have considered the model and found that starting level of GDP per capita, population of the country, government consumption and stability of property rights influence GDP growth rate. Also I found out that fertility rate has no effect on GPD growth rate. ...read more.