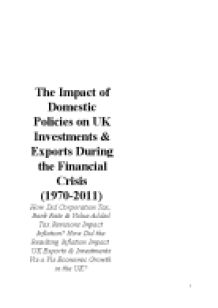 The Impact of Domestic Policies on UK Investments &amp; Exports During the Financial Crisis (1970 - 2011)

﻿The Impact of Domestic Policies on UK Investments & Exports During the Financial Crisis (1970-2011) How Did Corporation Tax, Bank Rate & Value Added Tax Revisions Impact Inflation? How Did the Resulting Inflation Impact UK Exports & Investments Vis a Vis Economic Growth in the UK? W12313055 Word Count: 2,994 (Excluding Tables & Appendices) Abstract ________________ This report examines the impact of the following policy reforms on the aggregate economy in the United Kingdom, during the financial crisis: A reduction in corporation tax (2008), a reduction in the bank rate (2009) and an increase in value added tax (2011). Firstly, an overview of historic economic events affecting the UK economy during 1970 to 2011 is given. It is found that oil ?shocks? during the 1970s were a major impact on the UK economy, with inflation at its highest and GDP growth at its lowest. During early stages of the 1990s, an end to the British membership of the exchange rate mechanism caused high interest rates, falling house prices and an overvalued exchange rate, therefore, leading the UK into a recession. Following this event, the 2008 financial crisis triggered by the global ?credit crunch? plunged the UK back into a deep recession, with poor economic growth, high inflation and high unemployment. The resulting inflation caused by the crisis is then discussed in depth, examining the impact that the financial crisis and policy reforms had on prices in the UK. It is found that sharp rises in electricity and gas prices were the primary reasons for high inflation during the crisis years (2008 to 2011). It was also found that a reduction in the corporation tax and the bank rate both encouraged investments and consumption, which in turn created a positive impact on UK exports. However, increases in VAT directly led to a reduction in investments and consumption, as well as UK exports. The impact of inflation on investments in the UK showed that a rise in prices evidently discouraged businesses and consumers to invest in capital goods or further investment projects. ...read more.

This was reflected by inflation growth rate remaining generally flat during this period (Chart 3.2a). Alternatively, businesses may have used extra net profits to pay higher dividends to shareholders. Shareholders? gains increased as a result, and so the psychological impact of feeling ?wealthier? may have encouraged shareholders to spend or invest more. These sudden consumption boosts may have also increased aggregate demand to the stage that demand outweighed output, forcing businesses and retailers to increase their prices, to reduce demand. Due to inertia, the effect of this may have actually contributed during 2010-11 (Chart 3.2a), where significant rises in inflation was observed once again. Another perspective is that a lower rate in corporation tax may have also increased UK international competitiveness in terms of business and investments. A lower rate encouraged international investors to ?set up? businesses in the UK, and so increasing inward investments. The rise in investments and so consumption may have also pressured prices upwards, due to rising aggregate demand. However, this impact may not have been instantaneous. This indirect impact from a corporation tax reduction may have in fact taken place during 2009 to 2010-11, where significant rises in inflation reoccurred (Chart 3.2a). Impact of Bank Rate Reduction on Inflation ? 2009 2009 A bank rate is the rate of interest that the central bank lends money to domestic banks. As stated previously, soaring prices during 2008 called for a reduction in the bank rate from 1.0% to 0.5% in 2009, in order to lower borrowing costs and so to stimulate consumption and investments. Impact This proposed lower borrowing costs for borrowers and spenders, due to the rate of interest on repaying loans being lower; this may have instantaneously contributed to the collapse in the level of prices during 2009 (Chart 3.2a). Presumable, this increased business spending on capital goods such as machinery, and so investments in the UK increased. ...read more.

Although consumption in the UK was expected to be affected, adverse effects on UK exports and investments were the prime affected components that reduced economic growth in the UK. A reduction investments resulting from the increase in prices and so a fall in aggregate demand, was primarily due to uncertainty surrounding the rate of return that investors would retrieve from investing in capital goods. Sharp price rises in domestic goods also discouraged foreign buyers from purchasing domestic goods and so exports fell rapidly. 3. A rise in imports further deteriorated exports, as domestic consumers were encouraged to purchase cheaper foreign goods. The sharp declines in consumption due to rising prices therefore put pressure on the government to intervene through transfer payments, in an attempt to boost disposable income. Further interventions were through policies announced during 2008, 2009 and 2010. A reduction in the UK?s corporation tax rate (2008) stimulated investments somewhat, as the additional retained profits enabled businesses to invest further or pay higher dividends to shareholders. Rising investment in construction and manufacturing sectors, contributed to the periods of rising UK exports. 4. This had a gradual contribution to the years of rising economic growth in the UK. A reduction in the bank rate (2009) further increased chances of an increase in investments, due to lower borrowing costs; this also increased investments on capital goods. This stimulating factor created a positive effect on consumption, investments, net exports and so aggregate demand. These were all major drivers in encouraging the UK?s GDP growth, particularly during the crisis years. An increase in VAT (2010) caused an expected adverse multiplier effect on all components of aggregate demand vis a vis the UK?s economic growth, due to the additional costs. 5. Ultimately, volatility in prices altered pricing mechanisms and so resources were not allocated efficiently, due to businesses and consumers having little information on the level of prices to make reasonable choices when purchasing or supplying products. As a result, lower consumption, exports and so investments, were the major contributors to the shortfalls UK?s GDP growth vis a vis economic growth. 9. ...read more.