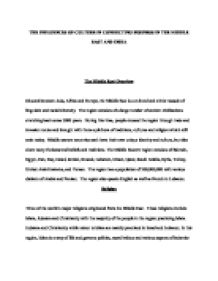 THE INFLUENCES OF CULTURE IN CONDUCTING BUSINESS IN THE MIDDLE EAST AND INDIA The Middle East Overview Situated between Asia, Africa and Europe, the Middle East is a cultural and ethnic mosaic of linguistic and racial diversity. The region consists of a large number of ancient civilizations stretching back some 3000 years. During this time, people crossed the region through trade and invasion routes and brought with them a plethora of traditions, cultures and religion which still exist today. Middle eastern countries each have their own unique identity and culture, but also share many fundamental beliefs and traditions. The Middle Eastern region consists of Bahrain, Egypt, Iran, Iraq, Israel, Jordan, Kuwait, Lebanon, Oman, Qatar, Saudi Arabia, Syria, Turkey, United Arab Emirates, and Yemen. The region has a population of 200,000,000 with various dialects of Arabic and Persian. The region also speaks English as well as French in Lebanon. Religion Three of the world's major religions originated from the Middle East. ...read more.

The Middle East region has been characterized by civil unrest and violence among ethnic and religious groups, with much of the region struggling with political turmoil and conflict among differing ideologies, progressive steps marked by peace treaties and international assistance have helped to stabilize parts of the Middle East. The written language, Arabic and Hebrew, is written right to left. The working week in the region tends to begin on Sunday and end on Thursday, with some countries beginning on Saturday and ending on Wednesday. Friday is the Muslim holy day and is considered part of the weekend. In Israel, the Sabbath is on Saturdays and many businesses will be closed. People in this region have a more flexible attitude towards time and do not always start or finish at the scheduled time. Punctuality will be expected of foreigners, although local nationals may not be as punctual. ...read more.

This forms the basis of India's society. India has 21 official languages including Hindi, Urdu, Tamil, Bengali, Kashmiri as well as English. Religion Religion is a way of life in India, and must be respected in order to maintain successful business relationships. Although the traditional cast system has been eliminated, attitudes still remain and both aspects of Indian culture still influence the hierarchical structure of business practices in India today. The elimination of the cast system was a direct outcome of Hinduism. Fatalism is a concept that stems from one of the most characteristic traits of Indian culture, spirituality. The notion of karma and that everything happens for a reason is still significant in the decision making process of many Indians. It also influences the concept of time in India and as a consequence business negotiation's may take longer and are never rushed. India has a greater acceptance of hierarchical settings, this is due to a strong sense of community and group defined orientation. ...read more.