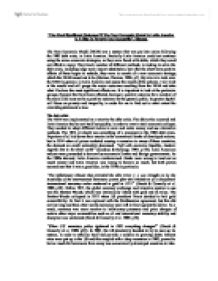 'The Most Significant Outcome Of The New Economic Model In Latin America Is A Rise In Poverty And Inequality'. Discuss. The New Economic Model (NEM) was a system that was put into action following the 1982 debt crisis, in Latin America. Basically Latin America could not continue using the same economic strategies, as they were faced with debts, which they could not afford to repay. They tried a number of different methods, in looking to solve the debt crisis, including large-scale import substitution, but after the short-term positive effects of these began to subside, they were in search of a new economic strategy, which the NEM turned out to be (Bulmer-Thomas. 1996. p1). My aim is to look over the NEM in general, in Latin America and assess the results of the scheme. I will look at the results and will gauge the major outcomes resulting from the NEM and state what I believe the most significant affects are. It is important to look at the particular groups of people that have been affected, because a positive outcome for a member of the social elite may not be a positive outcome for the general public. In greater depth I will focus on poverty and inequality, in order for me to find out to what extent the overriding statement is true. The debt crisis The NEM was implemented as a retort to the debt crisis. ...read more.

1996. p1). Basically the NEM was a way of trying to reverse the trends, which led Latin America into its dire position. Inwards-looking development and import substitution would be replaced with the promotion of exports, to lead to export-led growth. With state-owned enterprises being so costly, privatisation would be championed, allowing more of a free market setting to generate wealth (Bulmer-Thomas. 1996. p10). Trade liberalisation is seen as an imperative measure in the NEM, for export-led growth to be able to occur. With the stern trade barriers erected during the 1930s and the general "anti-export bias" in Latin America, it is much harder for the export market to flourish and to achieve a good balance of payments record. Therefore the lowering of tariff and non-tariff barriers to trade is necessary. Latin America is forced to open itself up to the world market, with the NEM. With the proliferation of Latin American exports, in theory the world market should be more competitive and so the imports coming back into Latin America should also be of a higher quality and possibly cheaper and so trade liberalisation should help them indirectly as well as directly (Bulmer-Thomas. 1996. p10). The initial stabilisation that is required by the NEM in its first phase is mainly based on controlling the level of inflation. The NEM recommendations are that government savings are increased, with higher interest rates and wage controls to play down consumption. ...read more.

If the model is not implemented how it was intended, that it cannot really be blamed for rises in poverty and inequality. It is similarly true that it is not just the factors resulting from the implementation of the NEM that cause poverty and inequality. Education, health care, sanitary standards and more, all have a decided impact on poverty. The processes that have been put into place by the NEM have led to rises in poverty in the majority of cases. If implemented correctly, in theory the NEM should reduce poverty though. With economic growth, produced through the promotion of and increased levels of exports and the exportation of non-traditional goods, wealth should be generated for a wider ranging labour force. This has not been the case though, with traditional exports being the focus and growth not even resulting from exports in many cases (like Argentina). Therefore I would say that rises in poverty and inequality are not the most significant outcomes of the NEM in Latin America. The model is designed to reduce poverty if implemented in theory and there are other large-scale factors to take into consideration such as demographic fluctuations. I believe that the main or major outcomes of the NEM have been the gradual stabilisation and return to growth of many Latin American economies and the efficiency of governments increasing. In time when governments have become self-sustaining and are developing, they will be able to tackle the problems of poverty and inequality with more vigour. ...read more.