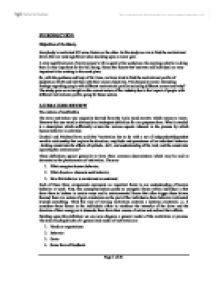 The nature of motivation.

INTRODUCTION Objectives of the Study. Everybody is motivated BY some factors or the other. In this study we aim to find the motivational drives that are most significant when deciding upon a career goal. A very significant part of every person's life is spent at his workplace. So enjoying what he is doing there is very important for his well being. Hence the factors that motivate and individual are very important to be existing in his work place. So, with the guidance and help of Dr. Fenn, we have tried to find the motivational profile of students in XLRI and link then with their career objectives. This helped to reveal interesting findings regarding people with different motivational profiles selecting different careers and why? The study gave us an insight on the current nature of the industry due to the impact of people with different motivational profile going for those sectors. LITERATURE REVIEW The nature of motivation The term motivation was originally derived from the Latin word movere, which means to move. However this one word is obviously an inadequate definition for our purposes here. What is needed is a description which sufficiently covers the various aspects inherent in the process by which human behavior is activated. Cambell and Pritchard have said that "motivation has to do with a set of independent/dependent variable relationship that explain the direction, amplitude and persistence of an individual behavior , holding constraints the effects of aptitude , skill, and understanding of the task, and the constraints operating the environment." These definitions appear generally to have three common denominators which may be said to characterize the phenomenon of motivation. They are 1. What energizes human behavior, 2. What directs or channels such behavior, 3. How this behavior is maintained or sustained. Each of these three components represents an important factor in our understanding of human behavior at work. First, this conceptualization points to energetic forces within individual s that drive them to behave in certain ways and to environmental forces that often trigger these drives. ...read more.

Thus, in theory, scientific management represented a joint venture of management and workers to the mutual benefit of both. If production problems arose, they could be solved either by altering the technology of the job or by modifying the wage incentive program. This approach to motivation rested on several very basic contemporary assumptions about the nature of human beings. Specifically, workers were viewed as being typically lazy, often dishonest, aimless, dull, and, most of all, mercenary. To get them into the factories and to keep them there, an organization had to pay a "decent" wage, thus outbidding alternative forms of livelihood (e.g., farming). To get workers to produce, tasks were to be simple and repetitive, output controls were to be externally set, and workers were to be paid bonuses for beating their quotas. The manager's major task was thus seen as closely supervising workers to ensure that they met their production quotas and adhered to company rules. As this model became increasingly applied in organizations, several problems began to arise. To begin with, managers, in their quest for profits, began modifying the basic system. While jobs were made more and more routine and specialized (and "efficient" from a mass-production standpoint), management began putting severe constraints on the incentive system, thereby limiting worker income. As factories became more "efficient," fewer workers were needed to do the job and layoffs and terminations became commonplace. Workers responded to the situation through elaborate and covert methods of restriction of output in an attempt to optimize their incomes, while at the same time protecting their jobs. Unionism began to rise, and the unparalleled growth and efficiency that had occurred under scientific management began to subside. In an effort to overcome such problems, some organizations began to reexamine the simplicity of their motivational assumptions about employees and to look for new methods to increase production and maintain a steady work force. ...read more.

Repetition of factors amongst similar questions served to reinforce the choices made. The reason for this is that we wanted to observe how the students would rank each motivator with the other. Repetitive questions with four choices each would be a lot easier to answer than a question where one had to just rank all nine factors. Not only did the question put things into perspective, but also it would be a lot easier to rank of four factors at a time, each in relation with the other. It is easier to attend to four factors at a time than to cast one's mind over nine factors. Ten points were allocated to each question because we felt it would be easier to attain a level of discrimination, while at the same time accommodating reasonable extremes, with such a number. Each factor appeared eight times and the scores of each student were added up for each. So, at the end of it we got a nice, neat score, nine to be precise, for each student. Adding these up for all, across batches, courses and genders we arrived at our profile charts. Questionnaire is attached as Appendix A. MOTIVATIONAL PROFILE We measured for the above 9 factors of motivation and had this response from the entire sample space well represented by the Pie chart. The striking feature of this response is there is no run away winner. The share is well distributed with minor differences dividing the various factors. The most surprising finding which emerged was Salary (Financial Gain) was not the winner though it was a close second with 12% response along with creativity. The winning factors with a thin margin though were Self development and interests and usefulness of work done. The difference between the strongest motivating Factor and the least one in the choice given was a mere 4% ( 13% for Self development and interests and 9% for power and structure). ...read more.