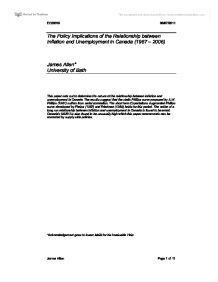 Dev. 3.04 2.05 Skewness 0.85 0.13 Kurtosis -0.31 -0.5 Table 2: Summary Statistics Points of interest from Table 2 include the much greater volatility of inflation as compared to unemployment as defined by the standard deviation (3.04 compared with 2.05). The average value of inflation as defined by the mean however is much lower than that of unemployment (4.59 compared with 7.96). Figure 1: Inflation/Unemployment Time Series Plot The interesting feature from Figure 1 to note is that except from periods 1973-1976 and 1978-1981 the rate of inflation has been lower than the rate of unemployment. This suggests that Canadian governments over the last 40 years have seen low inflation as a higher priority policy target rather than low unemployment. This was explicitly stated in 1991 when inflation-control targeting was introduced by the Bank of Canada whose target rate of inflation is 2% with a 1% margin of error. This could well explain the much reduced volatility and lower mean value for inflation in the sample period 1991-2006. However as can be seen from the chart unemployment still remains stubbornly high throughout that period suggesting a trade-off between inflation and unemployment may still be in evidence. "Since its introduction in 1991, inflation-control targeting has (...) helped keep the rate of inflation within acceptable limits. (...) The Bank of Canada aims to keep inflation at the 2 per cent target, the midpoint of the 1 to 3 per cent inflation-control target range." - http://www.bankofcanada.ca/en/inflation/index.html Bank of Canada (2008) The first diagnostic test to be run is to ensure the error terms generated are not serially correlated. The null hypothesis is and that the errors are serially uncorrelated. ...read more.

228 Table 3). VI. Conclusion This study establishes there to be no long term causal relationship between inflation and unemployment in the long term as hypothesised by Friedman (1968, 1977) in his development of the long term Phillips curve. This study therefore accepts the Monetarist interpretation of the relationship between inflation and unemployment in the long term and rejects the Keynesian interpretation of the relationship. In the short term the Canadian government may well be able to reduce unemployment by allowing inflation to increase. But in the long term people's expectations will adjust and the economy will find equilibrium at a higher inflation rate but at the existing natural rate of unemployment. This establishes the policy recommendation that Canada need not concentrate on one policy objective, keeping inflation low and stable as outlined by the Bank of Canada's policy objective, but can also enact measures to reduce unemployment. The natural rate of unemployment was found to be 9.11% which is very high for a country within the G7. Laubach also found evidence that the NAIRU in Canada has barely changed in the last 30 years, this means the assumption of the NAIRU as a constant in my modelling holds. For Canada to reduce the NAIRU and hence its unemployment level it must implement measures to reduce wage and price rigidities otherwise known as "supply side measures". This can include de-regulation of labour and product markets, trade union power reduction and reducing the tax burden on individuals and firms as outlined by Coe (1989). He places particular emphasis on the Canadian Government reducing unemployment benefits, eliminating extended regional benefits for individuals and on maintaining a low relative minimum wage to reduce the NAIRU in Canada. VII. ...read more.