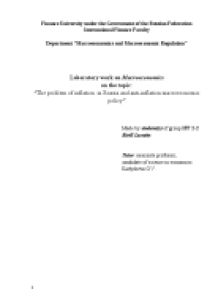 Falling confidence in future income, the population loses its economic incentives, reduced business activity. Next effects of inflation - the real money interest rate is reduced by the annual percentage increase in inflation. And finally emphasize that inflation is almost always combined with high, although part-time work and a large amount of national production. Conversely, a decrease in inflation coincided with the decline of production and rising unemployment. The negative effects of inflation evident in the field of foreign relations. Inflation has a negative impact on the balance of payments of the country, leading to a depreciation of the national currency, creating problems of repayment of foreign debt. With rising prices in the domestic market is declining exports and rising imports. The balance of payments is negative. For the balance of payments the state has to use foreign exchange reserves, and then, when the reserves are exhausted, devalue the currency. The latter measure although increases export opportunities for the economy, but creates difficulties in the development of end-uses of imported goods or raw materials. In addition, the devaluation makes it extremely difficult external debt: to return the unit of foreign currency requires increasing the number of units of the national currency. An important consequence of inflation is to redistribute income. With rising living standards reduced the general population by reducing its real income. However, different social groups have different degrees of loss from inflation. First, the rise in prices affects persons who receive fixed incomes, pensioners, students, the unemployed. Government measures to the indexation of pensions, allowances, benefits, tend to lag behind the increase in prices. Significant losses are almost all persons employed in the public sector. Wages, especially of education, science, culture, etc., always grows more slowly than prices. This reduces their motivation to work. Is the movement of labor from these socially important spheres in more profitable sectors. Deterioration of living conditions mainly from representatives of social groups with solid income (pensioners, employees, students, whose revenues are from the state budget). ...read more.

As a result, the process of inflation - in its various forms - is not accidental, but very stable. Control inflation is the most important problem of monetary and economic policy in general. To consider in this polysyllabic, multifactorial nature of inflation. It is based on not only monetary, but also other factors. For all the importance of public spending cuts, the gradual contraction of the monetary issue requires a broad range of anti-inflation measures. Among them - the stabilization and stimulation of production, improve the tax system, the creation of market infrastructure, increasing the responsibility of enterprises for the results of operations, changes in the exchange rate, holding certain measures to regulate prices and incomes. Normalization of monetary inflation and opposition demands tuned, flexible solutions that consistently and purposefully carried out in life. Today one of the main objectives of politicians and economists Russia is to reduce inflation. To do this, special attention is paid to de-monopolization, the elimination of corruption, an internal competitive economy and the real development of the civil society. The consequences of the heat wave in 2010 had a negative impact on inflation. Because of the drought in major agricultural regions of Russia in 2010, the harvest had dropped significantly, leading to a significant increase in food prices, from III quarter of 2010. As a result, the overall consumer price inflation in 2010 was 8.8%, which is worse than the original projections. While inflation has not exceeded the post-Soviet low achieved in 2009. In early 2011, there was a significant acceleration of consumer prices. However, due to the actions of the Government and the Bank of Russia, as well as lower food prices in world prices has slowed. Since the beginning of the year (as of June 14, 2011), the consumer price index was 4.8%, for the year is expected to increase prices in the range of 6.5-7.5%. In 2012 the task of reducing inflation to 6%, in 2014 - to a level that does not exceed 4-5%. ...read more.