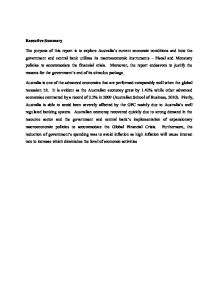 The purpose of this report is to explore Australias current economic conditions and how the government and central bank utilizes its macroeconomic instruments Fiscal and Monetary policies to accommodate the financial crisis. Moreover, th

Executive Summary The purpose of this report is to explore Australia's current economic conditions and how the government and central bank utilizes its macroeconomic instruments - Fiscal and Monetary policies to accommodate the financial crisis. Moreover, the report endeavors to justify the reasons for the government's end of its stimulus package. Australia is one of the advanced economies that are performed comparably well when the global recession hit. It is evident as the Australian economy grew by 1.42% while other advanced economies contracted by a record of 3.2% in 2009 (Australian School of Business, 2010). Firstly, Australia is able to avoid been severely affected by the GFC mainly due to Australia's well regulated banking system. Australian economy recovered quickly due to strong demand in the resource sector and the government and central bank's implementation of expansionary macroeconomic policies to accommodate the Global Financial Crisis. Furthermore, the reduction of government's spending was to avoid inflation as high inflation will cause interest rate to increase which diminishes the level of economic activities Introduction The Global financial crisis (GFC) is considered to be the worst financial crisis since the Great Depression in 1930. There are several factors that triggered this global recession, however it is initiated by the increased subprime loan and housing bubbles which inevitably leads to collapse of large financial intuitions such as Lehman Brothers and Merrill Lynch. And the world stock markets reached the historical low level. As a result of this crisis, business activities have decreased dramatically and unemployment rate have skyrocketed; consumer and investors' confidence were destroyed. ...read more.

(Statement on Monetary Policy, Feb 2011) However, imports are expected to grow at an above-average pace going forward, reflecting the relatively high exchange rate and expected growth in domestic demand. Figure 7 Macroeconomic policies used to accommodate GFC Fiscal Policy Fiscal Policy is the instrument by which government changes their spending, either in the form of tax collections (t), government expenditure (G) or transfer payments (TR) to ease the fluctuation in the business cycle and helps to maintain stable economy. During the GFC, it is necessary that the government use expansionary fiscal policy to limit the duration of recession and to increase aggregate demand, which is the Keynesian approach. Discretionary Fiscal Policy When the GFC has hit the Australian economy, the government applied expansionary fiscal policy by introducing two stimulus packages to reduce recession symptoms. The government firstly introduced the 'Economic Security Strategy' to strengthen the Australian economy during the global financial crisis. This strategy will provide a relief from the global crisis through strengthen the national economy and support Australian households. In order to further increase consumer spending and restore investors' confidence, the government further introduced a $42 billion National Building and Jobs Plan, providing a boost to the economy of around 1/2 per cent of GDP in2008-09 and around 3/4 to 1 per cent of GDP in 2009-10. This stimulus encompasses Government Investment expenditure and Transfer payments to influence the level of aggregate-demand and output, thereby increasing equilibrium income and GDP. The Stimulus Package focuses on microeconomic reform initiatives and government investment expenditure on large-scale infrastructure projects. ...read more.