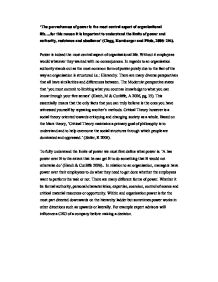 Theories on Power in Organisations. The primary goal of critical theory is to properly understand and assist in overcoming the social structures through which people are dominated within an organisation.

'The pervasiveness of power is the most central aspect of organisational life....for this reason it is important to understand the limits of power and authority, resistance and obedience' (Clegg, Kornberger and Pitsis, 2008: 294). Power is indeed the most central aspect of organizational life. Without it employees would whatever they wanted with no consequences. In regards to an organisation authority stands out as the most common form of power purely due to the fact of the way an organisation is structured i.e.: Hierarchy. There are many diverse perspectives that all have similarities and differences between. The Modernist perspective states that 'you must commit to limiting what you count as knowledge to what you can know through your five senses' (Hatch, M & Cunliffe, A 2006, pg, 15). This essentially means that the only facts that you can truly believe is the ones you have witnessed yourself by repeating another's methods. Critical Theory however is a social theory oriented towards critiquing and changing society as a whole. Based on the Marx theory, 'Critical Theory maintains a primary goal of philosophy is to understand and to help overcome the social structures through which people are dominated and oppressed.' (Seiler, R 2006). To fully understand the limits of power we must first define what power is. 'A has power over B to the extent that he can get B to do something that B would not otherwise do' (Hatch & Cunliffe 2006). ...read more.

The final face of power incorporates hegemony where for example managers will subtly influence the interests of workers so that they are thinking what managers want them to. The labour process theory is the last form of critical theory, which was devised by American sociologist Harry Braverman. He believed that managers of production can control work by deskilling the labour force by job fragmentation and simplifying each workers duties into one task. This takes on the practices that were earlier introduced by Frederick Taylor in his scientific management. (Hassard, Hogan & Rowlinson, 2001). The many facets of Critical Theory mentioned above all indicate how power is the central aspect of Organisational life. Critical Theorists refer to power as 'a defining ubiquitous feature of organisation life' (Miller, K 2006, pg 101). Power is always related to control domination and exploitation in which all these ideas are key in critical theories. Miller (2006) states that there are three approaches to the concept of power. They are the Traditional approach where power is possessed by those who are high up on the hierarchical chain, the symbolical approach where power is a product of social interactions and finally radical-critical approach whereby 'economical, social, and communicative relationships produce and maintain organisational power relationships' (Miller, 2006, pg 101). The labour process theory has been used heavily in organisations, which is creating quite an imbalance in regards to power within the workforce. ...read more.

In essence employees have no input into the decision making process. If an organisation decides to adopt a socio-technical systems approach then power is predominantly shifted from the managers to the employees. This is because the employees are more left to them to do their tasks without constant supervision and the ability to use teamwork to meet a common goal. In regards to respect and obedience employees are mindful that the managers are the boss and understand that without them the organisation would not run successfully. Being a cooperative team member is vital to an organisation to run smoothly. The ability to understand what tasks need to be completed and obeying orders from superiors is paramount. In conclusion, power is the most central aspect of organisational life. Without power in the workplace there would be no structure and employees would have no motivation to complete their tasks. Power in organisations need to be evenly distributed amongst managers in order for employees to be motivated to work. The limits of power and authority show that within an organisation there needs to be a balance of power, authority, respect and obedience. Manager's needs to demonstrate their power to the extent that their employees perform their tasks but at the same time not to hold it over its employees heads. Employees need to respect the power balance and obey what their supervisors ask of them. It is for these reasons that The pervasiveness of power is the most central aspect of organisational life. ...read more.