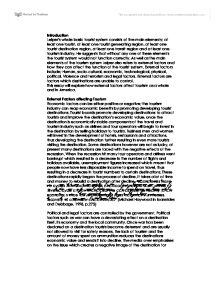 This essay will explore how external factors affect tourism as a whole and in America.

Other laws and regulations set by the government include; consumer protection laws which ensure that consumers are sold quality products, organisations must abide by the trades description act 1968. These laws and regulations have a positive effect on the tourism industry as tourists have more trust in travel and tourism organisations to sell them quality products and services and thus are more willing to travel. Employment laws include paid holidays, which allow employees to have paid time off work to travel. This is a positive external factor because without paid holidays a lot of working and lower class citizens may not be able to afford to take unpaid time off work which will reduce tourist numbers dramatically thus reducing the economic value of most destinations. Socio- cultural factors are influences that society has on an individual, for example society has created a stigma about travelling to certain destinations such as Benidorm, this influences whether or not a tourist will choose to travel to Benidorm. Developments in information technology such as personal laptops, wireless internet and better software has changed the way businesses operate; With advanced technology it is much easier and time effective to carry out paper work online and consumers can now purchase travel components such as flights and hotel rooms online which means very few employees are required. ...read more.

However the poor exchange rate also means that American tourists are not getting as much currency in exchange for their Dollars when visiting foreign destinations and have decided to go on domestic holidays within America instead. As the majority of America's tourists were incoming tourists tourist numbers have rapidly decreased since the recession hit, which has lowered the country's economic value. The recession has also lead to a rise in unemployment and the collapse of businesses especially within the tourism industry. Conclusion External factors have a huge effect on the tourism system Leiper talks about. Whether they are positive effects or negative effects they can change a destination completely. For example economic factors can be negative such as the recession in America, as explained earlier, due to the recession many travel and tourism organisations such as hotels, airlines, attractions etc became bankrupt which could mean that some of America's most popular tourist attractions and facilities no longer exist. On the other hand a rise in the number of incoming tourists can increase the economic value of a destination. External factors can also change the dynamics of Leiper's tourism system; a development in transportation could result in tourists travelling directly to their desired destination, thus losing the need for the transit route element within Leiper's tourism system. ...read more.