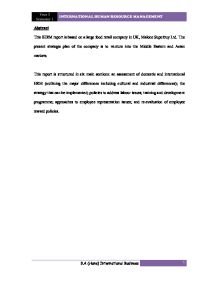 This IHRM report is based on a large food retail company in UK, Malone Superbuy Ltd. The present strategic plan of the company is to venture into the Middle Eastern and Asian markets.

Abstract This IHRM report is based on a large food retail company in UK, Malone Superbuy Ltd. The present strategic plan of the company is to venture into the Middle Eastern and Asian markets. This report is structured in six main sections: an assessment of domestic and international HRM (outlining the major differences including cultural and industrial differences); the strategy that can be implemented; policies to address labour issues; training and development programme; approaches to employee representation issues; and re-evaluation of employee reward policies. 1.0 Domestic and International Human Resource Management International Human Resource Management (IHRM) has many similarities with domestic Human Resource Management (HRM), but there are several important differences. Even though IHRM has the same functions as domestic HRM, there are numerous additional functions, and involves broader perspectives. With an increasing focus on globalisation, many companies have to compete on a worldwide basis. As a result, HRM in the international context requires developing an understanding of the issues facing multinational enterprises (Briscoe and Schuler, 2004). Therefore, an IHRM manager needs to consider more functions and activities than the one that is domestic based. While internationalisation has brought strategic opportunities to domestic and international organisations, concerns have been raised over the ecological and ideological sustainability of a continued pursuit of Western consumer capitalist business practises. Akoorie and Scott-Kennel (2005) refer to these concerns that relate to the world's natural resources such as oil, fresh water, forests and etc. Organisations are, according to them, being called to account to provide solutions to these problems. Proactive responses are required by management and HR is directly involved in this. Despite differing political views, cultural differences and value systems, there is a shift towards the adoption of Western business practises and consumer behaviour. The most common is the use of the English language in IHRM and international business. IHRM consists of the same main dimensions as domestic HRM, but there is more complexity in strategically coordinating the different organisational units across national barriers. ...read more.

According to a research made on the job satisfaction and incentives among China's urban workforce, it was claimed that women and fresh graduates have lower job satisfaction compared to men. This study shows that job satisfaction is a key factor that has an undeniable impact on the employee's motivation. As such, policies to create more challenging works should be reinforced to stimulate critical and analytical thinking among the employees to encourage motivation (Nielsen & Smyth, 2006). Research shows that job satisfaction is best predicted by the reward cost value of the job. Assan (1982) studied the job factors which is related to job motivation and job satisfaction which in return leads to performance of the job. 7.0 CONCLUSION Malone Superbuy Ltd has built a reputation for quality foods and this can be proven through the establishment of their outlets in south west and south east of Britain. As there are other competitors coming up, the company should have to get into a strategy that will enable them to compete in the market. They should play a managerial function to enhance the competitiveness of the organisation. This managerial function plays a vital factor in the organisation because the company with the addition of well managed employees will create competitive advantage. This is a rare gem as no one person is the same and the ability to correctly and precisely select and recruit the right person for the right job is not an easy feat. Different national culture will have an imperative and significant impact towards IHRM practices and policies. It will affect the way people work and hence, it will have a direct implication on the performance of Malone Superbuy Ltd. They should always look for methods and chance for strategic expansion, be it international or domestic. With HRM as a guide, it will further boost Malone Superbuy Ltd's performance as a successful conglomerate. Internal and external factors should be taken into consideration when making any IHRM decisions. A holistic and integrative HRM framework is definitely an important aspect in Human Resource. 8. ...read more.