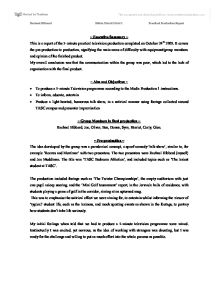 This is a report of the 5-minute practical television production completed on October 24th 2003. It covers the pre-production to production, signifying the main areas of difficulty with equipment/group members and opinion of the finished product.

~ Executive Summary ~ This is a report of the 5-minute practical television production completed on October 24th 2003. It covers the pre-production to production, signifying the main areas of difficulty with equipment/group members and opinion of the finished product. My overall conclusion was that the communication within the group was poor, which led to the lack of organisation with the final product. ~ Aim and Objectives ~ * To produce a 5-minute Television programme according to the Media Production 1 instructions. * To inform, educate, entertain * Produce a light-hearted, humorous talk show, in a satirical manner using footage collected around TASC campus and presenter improvisation ~ Group Members in final production ~ Rachael Hibberd, Joe, Oliver, Ben, Donna, Syra, Harriet, Carly, Glen. ~ Pre-production ~ The idea developed by the group was a paradoxical concept, a spoof-comedy 'talk show', similar to, for example 'Reeves and Mortimer' with two presenters. The two presenters were Rachael Hibberd (myself) and Joe Muddiman. The title was 'TASC Bedroom Athletics', and included topics such as 'The laziest student at TASC'. The production included footage such as 'The Twister Championships', the empty auditorium with just one pupil asleep snoring, and the 'Mini Golf tournament' report, in the Jervaulx halls of residence, with students playing a game of golf in the corridor, aiming at an upturned mug. ...read more.

Therefore this affected the efficiency of things. Syra was the main cause of this problem as she attended only one Media production lesson and approximately 15 minutes of private studio time. People were dropping out of Trinity all together, decreasing group members, forcing people such as myself to take on more roles. However, this did not bother me, as I was willing to make this production work. On the contrary, there were a select few who were willing to make the effort and this is what held it together. Caroline, the director, was extremely organised throughout and made suggestions on what to do. Claire, the PA, who actually dropped out of Trinity, the day before the production, was efficient up until this point and made every effort toward the script, which was used in the production. Tom, Ben, Joe, and Carly, and myself, were consistent in showing up to the private studio time, and working on the ideas. ~ Equipment ~ Throughout the four-week period leading up to the production I managed to familiarise myself with every aspect of the studio equipment. I enjoyed using the sound and the vision mixer, as it gave me a chance to experiment with different colours, images and sounds, which was interesting. The cameras were also interesting and I was intrigued by how different scenes look through a camera lens, as every shadow is accentuated. ...read more.

Generally, most team members gelled well together, and natural leaders such as Caroline, myself and Oliver came forward, which aided organisation, yet may have intimidated some members, which is something that could be avoided if we were to re-do it. ~ Evaluation ~ The production could be improved by better organisation and team work, as well as communicating better with others and voicing opinions aswell as letting others voice theirs. This was not successful in our group, as certain people were too self-involved to hear other people's ideas. Individually, I could have contributed more by making an effort to communicate with certain members who seemed to be having problems. The expectations of the group were too high; we did not realise that how little our TV production knowledge was, with little time to complete it. On a more positive note, most members gelled well and made an effective contribution to the success of the programme, however better communication and time management could definitely have improved it. To conclude, the television studio work was interesting and enjoyable, and the final piece was successful, despite problems that we faced, which can account towards the piece as a whole. I am satisfied with my contribution to the final piece and most of my expectations were met; as I knew it was not going to be easy, I made the effort and was willing to do the work. Words - 1121 Rachael Hibberd MEDIA PRODUCTION 1 Practical Production Report ...read more.