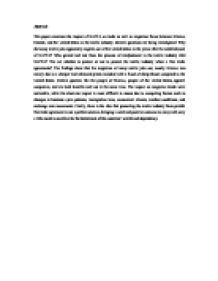 This paper examines the impact of NAFTA on trade as well as migration flows between Mexico, Canada, and the United States in the textile industry.

Abstract This paper examines the impact of NAFTA on trade as well as migration flows between Mexico, Canada, and the United States in the textile industry. Several questions are being investigated: Why did many textile jobs apparently migrate out of the United States in the years after the establishment of NAFTA? Who gained and lost from the process of readjustment in the textile industry after NAFTA? The act whether to protect or not to protect the textile industry when a free trade agreements? The findings show that the migration of many textile jobs out, mostly Mexico was mainly due to a cheaper and enhanced plants included with a flood of cheap labour compared to the United States. Certain quarters like the people of Mexico, people of the United States, apparel companies, and etc both benefits and lost at the same time. The impact on long-term trends were noticeable, while the short-run impact is more difficult to assess due to competing factors such as changes in business cycle patterns, immigration laws, economical climate, weather conditions, and exchange rate movements. Finally, there is the idea that protecting the textile industry from painful free trade agreement is not a perfect solution, bringing a solid and positive outcome to many with only a little much to sacrifice for the betterment of the countries' wealth and dependency. Introduction The first major international trade agreement in the world was the General Agreement on Tariffs and Trade (GATT) formed in 1947. Countries, including the United States and Canada, were members of this agreement. Mexico joined GATT several years later. Many countries had economies that had collapsed due to the World War II, so GATT was designed to increase trade liberalization between countries. The North American Free Trade Agreement (NAFTA) was implemented on January 1, 1994, designed to take away tariff barriers between the U.S., Canada and Mexico. Under the NAFTA, all non-tariff barriers to agricultural trade between the United States and Mexico were eliminated. ...read more.

Facilitated access to external funds resumed at that time and likewise played a role. After decades of tightly restricted access to foreign products, Mexican consumers began to eagerly satisfy their demand for a wide variety of goods and brands from abroad. However, to some extent, such import demand also mirrors the strong relations between exporting firms and foreign suppliers. The case of maquiladoras, which make up the most successful export sector to date, is typical because they rely on imported inputs and materials, and have weak relations with local suppliers. Another factor that boosted import penetration to the domestic market, and that should not be ignored, is the breakdown of some internal linkages in Mexico domestic productive structure, as local producers, as such in the textile industry have been put out of business by foreign competition. Applied studies (inter alia by Aroche, 2005; Moreno-Brid, 2001; Pacheco-Lopez, 2004) revealed that, in the last fifteen to twenty years, the Mexican economical structural dependence on imports has increased significantly. These results indicate that the long-term income elasticity of demand for imports (essentially manufactured goods) like textiles, ie: cotton, apparel, etc has more than doubled over this period where it was previously valued between 1.31% and 1.56%, it has now risen to almost 3%. This implies that if Mexican real income is to grow at an annual average long-term rate of 5%, its imports in real terms will need to expand yearly by 15%. As a benchmark, it is worth recalling that during 1988 and 1999, when the US economy grew in robust, Mexican exports increased at an average annual rate of 10%. Nevertheless in the United States side, when NAFTA was enacted, U.S. foreign direct investment (FDI) in Canada and Mexico more than tripled to $348.7 billion, including the textile industry. Canadian and Mexican FDI in the U.S. grew to $219.2 billion. NAFTA reduces investors' risk by guaranteeing they will have the same legal rights as local investors. ...read more.

But if, as the evidence strongly shows, free trade accelerates the process of development, raising output, leading to a convergence of relative commodity prices, and ultimately reducing poverty and inequality in all three countries, then it is important to push this free trade process forward, institutionalize it, and extend it to the rest of the hemisphere. Not only does free trade have positive social and economic benefits, it also has important political benefits. Reasons for protectionism are many and varied, ranging from the eternal search for an optimal tariff that will deliver the most favourable terms of trade, while enhancing government (tariff) revenues, protecting infant industries to narrow and etc. One thing is clear, however, the integration process cannot be moved forward without political leadership and the elimination of corruption, securing of contracts and property rights, the reduction of distorting internal taxation policies, and the creation of a favourable climate for foreign investment. Yes, free trade may have damaged textile jobs. However, the agreement has not brought about the death of the workforce. Throughout the first 15 years of the North American Free Trade Agreement, the United States income and employment grew steadily which counter-balance the loss they faced during the initial phase of the free trade. In conclusion, the initial years of a free trade implementation have created a clear and concise trend revealing increased trade in the next phase of time. The act of protecting vulnerable sector, textile sector will clearly show a loss of revenue in time to come for a free trade. Appendix Autex Research Journal - Home Page. (n.d.). Retrieved July 1, 2009, from http://www.autexrj.org/ Faux, G. P. (1993). The failed case for NAFTA: The ten most common claims for the North American Free Trade Agreement and why they don't make sense (Briefing paper / Economic Policy Institute). Washington, DC: Economic Policy Institute. Grieco, P. L., Hufbauer, G. C., Schott, J. J., & Wong, Y. (2005). NAFTA Revisited: Achievements and Challenges (Institute for International Economics) (Institute for International Economics). Washington, DC: Institute For International Economics. ...read more.