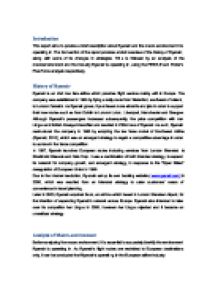 This report aims to provide a brief description about Ryanair and the macro environment it is operating in.

Introduction This report aims to provide a brief description about Ryanair and the macro environment it is operating in. The first section of the report provides a brief overview of the history of Ryanair, along with some of its changes in strategies. This is followed by an analysis of the macroenvironment and the industry Ryanair is operating in, using the PESTLE and Porter's Five Force analysis respectively. History of Ryanair Ryanair is an Irish low fare airline which provides flight service mainly within Europe. The company was established in 1985 by flying a daily route from Waterford, southeast of Ireland, to London Gatwick. As Ryanair grows, it purchased more aircrafts and jets in order to support their new routes such as from Dublin to London Luton, Liverpool, Manchester and Glasgow. Although Ryanair's passengers increased subsequently, the price competition with Aer Lingus and British Airways intensified and resulted in �20m loss of Ryanair. ...read more.

Moreover, customers are often price sensitive and can easily compare prices in the Internet (especially with the websites that provide an overview of the different prices offered by different airline companies). Threats of substitutes - Low: The substitutes (such as traveling by train, car, bus or boat) are not very close, especially for long-distance flights: even though they are sometimes less expensive, there are also much less convenient and don't represent a big threat for the airline industry. Intensity of rivalry among established firms - High: In the Europe's fragmented airline industry, the competition between companies is fierce: the transmission from a regulated environment to a deregulated during the past ten years has lowered the entry and exit barriers and therefore encouraged established companies to create alliances in order to compete against emerging low-cost carriers (LCC). Indeed, the increased bargaining power of price-sensitive customers associated with high fixed costs and powerful suppliers have resulted in an intense rivalry and lower profits within the airline industry. Reference * "About Us." Cheap Flights - Book cheap flights to Europe with Ryanair. 2010., n.d. Web. 23 May 2012. <http://www.ryanair.com/en/about>. ...read more.