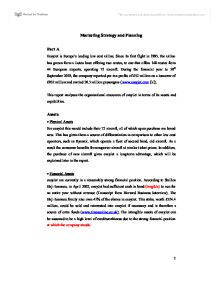 This report analyses the organisational resources of easyJet in terms of its assets and capabilities.

Marketing Strategy and Planning Part A EasyJet is Europe's leading low cost airline. Since its first flight in 1995, the airline has grown from a Luton base offering two routes, to one that offers 148 routes from 44 European airports, operating 72 aircraft. During the financial year to 30th September 2003, the company reported pre-tax profits of �52 million on a turnover of �932 million and carried 20.3 million passengers (www.easyjet.com [a]). This report analyses the organisational resources of easyJet in terms of its assets and capabilities. Assets * Physical Assets For easyJet this would include their 72 aircraft, all of which upon purchase are brand new. This has given them a source of differentiation in comparison to other low cost operators, such as Ryanair, which operate a fleet of second hand, old aircraft. As a result the consumer benefits from superior aircraft at similar ticket prices. In addition, the purchase of new aircraft gives easyJet a long-term advantage, which will be explained later in the report. * Financial Assets easyJet are currently in a reasonably strong financial position. According to Stellios Haji-Ioannou, in April 2002, easyJet had sufficient cash in hand (tangible) to run for an entire year without revenue (Transcript from Harvard Business Interview). The Haji-Ioannou family also own 41% of the shares in easyJet. This stake, worth �524.4 million, could be sold and reinvested into easyJet if necessary and is therefore a source of extra funds (www.timesonline.co.uk). The intangible assets of easyJet can be assumed to be a high level of creditworthiness due to the strong financial position at which the company stands. * Operations Assets The operations assets of easyJet includes both tangibles and intangibles. In order for easyJet to provide their service efficiently they need an integrated network of aircraft, routes and airport slots. Recently easyJet has added an extra slot from Liverpool to Cologne, giving a total network of 148 routes. ...read more.

These companies have dominated this market for several years and invest considerable amounts in marketing their services by using extensive advertising and promotional campaigns. This will increase consumer interest and create top-of-the mind awareness, which will have an affect on the consumers' decision of which credit card company to choose. To find any information on easyMoney, however, the consumer must actively search the Internet to find the website. It is unlikely easyMoney will invest in similar marketing activities as its competitors due to its policy of keeping costs to a minimum. These factors imply the strategy for managing easyMoney should be to invest more in marketing activities, or if this is not viable, the easyGroup should consider divesting easyMoney and concentrate on other activities. * easyTelecom The mobile phone industry is considered to be high growth due to the number of competitors still entering the market, for example '3'. Even easyJet's competitors Ryanair are considering entry. Stellios believes the industry is ripe for new low-cost entrants and has differentiated easyTelecom from the big competing names, such as Orange and Vodafone, by not selling handsets and concentrating on selling SIM cards with cheap calls. Due to recent controversy over extortionate call costs charged by large phone companies (REF), there is a gap in the market for easyTelecom's low cost service. The strategic implication is to continue or increase their investment in the company to attempt to give easyTelecom star or cash cow status. The risk of entering this market is lowered due to the entry strategy being based upon the core competencies of the business (Jobber 2001). * easyCinema The cinema industry has recently re-emerged into a high growth industry (Jobber 2001). However, at present, easyCinema has very low market share due to its inability to attract blockbuster films. The strategic implication is that the easyGroup should invest more money into it, as the concept has huge potential. ...read more.

easyCruise seem to have identified a large market segment that is not catered for, and it seems unlikely other cruise companies would not have researched targeting these consumers. * easyPizza The fast food delivery industry is considered to be low-growth due to the large amount of existing competitors in the market. In addition to the well-known pizza deliverers, such as Dominoes and Pizza Hut, easyPizza would also have to contend with smaller, independent companies. It is predicted easyPizza will have low market share due to the sheer size and reputation of its big name competitors. For example, Dominoes invests large amounts in marketing ventures, such as sponsoring 'The Simpsons' on Sky One, however such marketing would not allow easyPizza to operate at the low costs it proposes. easyPizza has differentiated its service by offering lower prices on pizzas delivered at an off-peak time. Further research would be required to investigate whether pizza is consumed at these times. However, despite this, it is possible easyPizza could gain relatively high market share if it finds a market that is not heavily saturated with independent pizzerias, plus its use of a celebrity chef (www.easypizza.com) may well differentiate them enough to provide a sustainable competitive advantage. It is therefore possible that easyPizza could be a problem child, rather than a dog, in which case consideration would need to be taken whether to further invest in easyPizza to make it a star, or whether to harvest or divest the company. Balance of the portfolio The portfolio isn't as balanced as it may seem. The amount of low market share projects is worrying given the number of them which are still in the pipeline and are due to be realised almost simultaneously. This will put a strain on the cash cows and it may be advisable to spread these over a longer period of time or divest some of the projects. Some of the existing businesses are rumoured to be struggling and it would be recommended to stabilise these before easyGroup ventures into new projects. Otherwise, they may be spreading themselves dangerously thin. (www.timesonline.co. ...read more.