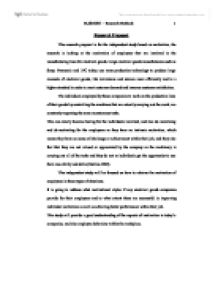 This research proposal is for the independent study based on motivation, the research is looking at the motivation of employees that are involved in the manufacturing lines for electrical goods.

Research Proposal This research proposal is for the independent study based on motivation, the research is looking at the motivation of employees that are involved in the manufacturing lines for electrical goods. Large electrical goods manufacturers such as Sony, Panasonic and JVC today, use mass production technology to produce large amounts of electrical goods, like televisions and stereos more efficiently and to a higher standard in order to meet customer demand and increase customer satisfaction. The individuals employed by these companies to work on the production lines of their goods by controlling the machines that are actually carrying out the work, are constantly repeating the same monotonous tasks. This can clearly become boring for the individuals involved, and also de-moralising and de-motivating for the employees as they have no intrinsic motivation, which means they have no sense of challenge or achievement within their job, and they also feel that they are not valued or appreciated by the company as the machinery is carrying out all of the tasks and they do not as individuals get the opportunity to use their own ability and skills (Mullins 2002). This independent study will be focused on how to achieve the motivation of employees in these types of situations. ...read more.

as it addresses not only the what Herzberg called the satisfiers (motivators) but also the importance of hygiene, as poor hygiene strongly contributes to dissatisfaction and de-motivation. McClelland's managerial needs theory explicitly recognises individual differences in motivation, which puts it at an advantage, as many theories had been flawed as they had not taken into account people's individual differences. However the publications also recognise that McClelland's theory was conducted using the Thematic Appreciation Test (TAT), which has been found to be unreliable (Hannagan 2002). This could therefore be detrimental to the accuracy of the research needed for the independent study on employee motivation. Process theories however show the variables that explain the direction and intensity of behaviour. These type of motivation theories are shown by Vroom's expectancy theory, Porter and Lawler's expectancy models and Adams equity theory, which should all be considered when writing a research proposal as they add to the understanding of motivation. "They provide a further contribution to our understanding of the complex nature of work motivation." (Mullins 2002 p.435). Vroom's theory is based on three key variables, which are valence, instrumentality and expectancy. The theory believes that people prefer certain outcomes from their behaviours over others. ...read more.

The second approach that the primary research will adopt is using the expectancy theory by conducting in-depth interviews with open questions that will be able to obtain qualitative data. This will allow employees to voice their individual opinions, and their expected outcomes of behaviour in their job. If face to face interviews are unavailable, then interviews over the telephone or via email may be considered in order to obtain the information but will not be as a effective and reliable as speaking to the employees in person. These approaches seem appropriate, as a more detailed description of the management environment can be revealed and compared with the workers views to meet the research objectives. To carry out this research, two established electrical goods companies will be selected, such as Sony and Panasonic. Both are successful firms, and the research will hopefully find out the way in which they manage to motivate their employees that are carrying out monotonous jobs on assembly lines for their products. From each company, a random selection of 100 employees will be made to represent an overall unbiased view of employees' motivational factors. Further secondary sources will be required in the assistance of analysing the quantitative data resulting from the specific questions, but the qualitative data from the interviews, will not be presented as results, the views from these will be discussed and analysed in the study. ...read more.