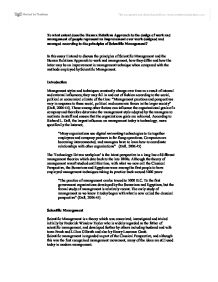 To what extent does the Human Relations Approach to the design of work and management of people represent an improvement over work designed and managed according to the principles of Scientific Management?

To what extent does the Human Relations Approach to the design of work and management of people represent an improvement over work designed and managed according to the principles of Scientific Management? In this essay I intend to discuss the principles of Scientific Management and the Human Relations Approach to work and management, how they differ and how the latter may be an improvement in management technique when compared with the methods employed by Scientific Management. Introduction Management styles and techniques constantly change over time as a result of internal and external influences; they may fall in and out of fashion according to the social, political or economical climate of the time: "Management practices and perspectives vary in response to these social, political and economic forces in the larger society" (Daft, 2006:44). These among other factors can influence the organizational goals of a company and therefore determine the management style adopted by the managers to motivate its staff and ensure that the organizations goals are achieved. According to Richard L. Daft, the largest influence on management today is technology, more specifically the Internet; "Many organizations use digital networking technologies to tie together employees and company partners in far-flung operations. Companies are becoming interconnected, and managers have to learn how to coordinate relationships with other organizations" (Daft, 2006:45) The 'Technology-Driven workplace' is the latest perspective in a long line of different management theories which date back to the late 1800s. Although the theory of management wasn't studied until this time, with what we now call the Classical Perspective, the Sumerians and Egyptians were among the first people to have employed management techniques taking its practice back around 5000 years: "The practice of management can be traced to 3000 B.C. To the first government organizations developed by the Sumerians and Egyptians, but the formal study of management is relatively recent. The early study of management as we know it today began with what is now called the classical perspective" (Daft, 2006:45) ...read more.

the employee, but in fact was heavily influenced by management or supervisory interest giving a feeling of recognition and a sense of belonging to the worker. (Answers.com, 2007) "employees who participate in scientific studies may become more productive because of the attention they receive from the researchers. This discovery became important in the human relations movement because it has been interpreted to mean that when employees feel important and recognized, they exhibit greater motivation to excel in their work activities." (Answers.com, 2007) What the studies showed was that even when the working conditions were eroded quite considerably, the workers output increased; "In one experiment, ample light was provided to a group of six female workers. Later, the amount of light was significantly reduced; but instead of productivity decreasing, as was expected, it actually increased." (Answers.com, 2007) This clearly demonstrated the importance of worker - management communication, and although Mayo's work came under much criticism in later years, it remained as probably the most influential work carried out on the subject up until the 1960's. (Accel-Team.com, 2007) The most significant discovery made by Mayo during the investigations was the influence that informal social groups had over employee motivation in the workplace. "Mayo had discovered a fundamental concept that seems obvious today. Workplaces are social environments and within them, people are motivated by much more than economic self-interest He concluded that all aspects of that industrial environment carried social value." (Accel-Team.com, 2007) According to Huczynski and Buchanan, the conclusions which can be drawn from the Hawthorne studies are as follows: 1. People at work are motivated by more than just pay and conditions. 2. Their need for recognition and a sense of belonging are very important. 3. A person's attitude to work is shaped strongly by the group to which that individual belongs within the company. 4. The ability of the informal group or clique to motivate an individual at work should not be underestimated. ...read more.

Conclusion This all goes to show that there is a clear link between the two styles of management, and although very different in the way that they tackled the subjects of productivity and efficiency and had different views about how it was most greatly affected, both the main protagonists had similar goals; as well as productivity both Taylor and Mayo wanted to improve employer - employee relations. When we consider the point in history that these theories were put forward we can see that they were very important and appropriate in their time however, if one is to consider today's social, political and/or economic climate, scientific management as it was in the late 1800s or early 1900s would be unacceptable were it introduced today and would not survive our workers unions. In that respect human relations management is an improvement over scientific management as it takes into account the needs, wants and rights of the individual. In that way it improves the relationship between management and the workforce which according to the evidence gathered during the human relations movement will itself benefit industry by helping to improve productivity. However as we have seen, many aspects of scientific management are alive and well and as influential as ever well over a hundred years after its inception. Staff performance audits, performance incentive schemes and structured employee training and development sessions all stem from Taylors scientific management. Human relations management has softened the harsher sides of Taylors scientific management and made it acceptable to the masses by building on what was already there, but the essence of modern operations management still echoes back to the times of Taylor. "While Taylor's impacts were the establishment of the industrial engineering, quality control and personnel departments, the human relations movement's greatest impact came in what the organization's leadership and personnel department were doing." (Kernsanalysis.com, 2007) Ultimately however, it was the work done during the human relations movement which has led to today's common corporate belief that a company's most valuable asset is its employees. ...read more.