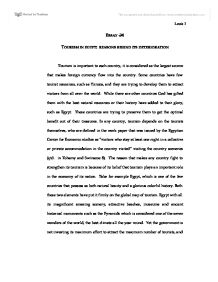 Tourism in egypt: reasons behind its deterioration

ESSAY # 4 TOURISM IN EGYPT: REASONS BEHIND ITS DETERIORATION Tourism is important to each country, it is considered as the largest source that makes foreign currency flow into the country. Some countries have few tourist resources, such as Tunisia, and they are trying to develop them to attract visitors from all over the world. While there are other countries God has gifted them with the best natural resources or their history have added to their glory, such as Egypt. These countries are trying to preserve them to get the optimal benefit out of their treasures. In any country, tourism depends on the tourists themselves, who are defined in the work paper that was issued by the Egyptian Center for Economic studies as "visitors who stay at least one night in a collective or private accommodation in the country visited" visiting the country sceneries (qtd. in Tohamy and Swinscoe 8). The reason that makes any country fight to strengthen its tourism is because of its belief that tourism plays an important role in the economy of its nation. Take for example Egypt, which is one of the few countries that possess as both natural beauty and a glorious colorful history. Both these two elements have put it firmly on the global map of tourism. Egypt with all its magnificent amazing scenery, attractive beaches, museums and ancient historical monuments such as the Pyramids which is considered one of the seven wonders of the world, the best climate all the year round. Yet the government is not investing its maximum effort to attract the maximum number of tourists, and in making the national tourism flourish. The Egyptian government does not know how to protect and preserve its treasurers and to use its available resources. Moreover, the statistics that are reported by the Egyptian Center for Economic studies state that 5.7% of the total employment in Egypt is in tourism (qtd. ...read more.

Hence, we should take great care as any mistake results in a century of reef development. The Egyptian government should take into consideration how those reefs are suffering high pollution due to major developing constructions on the area. Officials should do their best to preserve and protect these rare species that exist, like making protectorates, as those are part of Egypt's greats assets in tourism. We lose our assets we lose our income from tourism. In Egypt there are plenty of sources that are either neglected or not used in an efficient way. In Al Aham Weekly a writer wrote that there are major mistakes done during the process of tourist development, the government "do not retain the main style of natural beauty and build new styles as in new beach resorts, that will definitely preserve the environment and uphold the true principles of development" (Salama). That is clearly envisioned by the North Coast of Egypt, where a humongous number of villas are built stretching through the coastline. These are built for people who will only utilize them at a maximum of one month per year. I believe, as a better investment we should think of developing or building something that could be visited and seen all the year round. Moreover, there the government does not facilitate to the tourists their needs. Hence, there are "many places which sorely lack several basic services" (Bakr, "Celebrating..."), like transportation, telecommunication network, emergency hospitals on the high way, and Internet services. According to Mohamed Lehita, Head of the Egyptian Travel Agent Association (ETAA), "there were as many as 56 medical centers in Egypt geared towards "health tourists", but many of these are closed due to urban expansion and pollution, bringing the number down to a mere of 26" (qtd. in Sami). Moreover, General Mustafa Afifi, Governor of South Sinai, points to the significant "reduction in the number of tourist vessels from 1200 to 320" (qtd. ...read more.

I see that this is really ridiculous. In my interview with Ms. Mona Mohie, I asked her why the prices are that high. She said "abroad hotels offer better prices than the local ones, and the opposite also happens, where a group of tourists coming from abroad can have better offers for Hurghada than what is offered to the Egyptians" (Mohie). Another thing that affect the national tourism is the rate of exchange of a Dollar to an Egyptian Pound, which is almost $ 1/- equals LE 4/-. As a value it is minimal to the tourists but high to the Egyptians. To clarify more, in my interview with Mohamed Saleh, owner of a Diving Center in Sharm El-Sheikh, he said that few Egyptians take the diving course, as it is quite expensive. It ranges around US$ 300/-. That is cheap for any tourist, but in conversion to the local currency it jumps to almost LE 1000/-, which of course is quite high. Moreover, a research was done comparing between the national tourism in Egypt and the United States. It was found that 19 million go to Washington, DC from within USA, where a very few number of Egyptian travel within Cairo (Zohery). In both countries national tourists go for the same reasons, which is sightseeing of different sites, museums, historical monuments, lovely beaches. But the problem in Egypt is that Egyptians cannot pay the offered rates, which is not very tempting. While in the United States, Americans can, it is affordable. The Egyptian government has to improve its national tourism and have to put together a plan to attract its national citizens. The Egyptian population is very high and definitely the government can have very high revenue with a good policy. To sum up, expectations based on research and statistical information show that Egypt can have the best tourism industry in the whole world. It has all the basic elements for success. It has God gifted resources on earth, but there are problems, which could be solved if the government follows were to addresses them. Louis 1 ...read more.