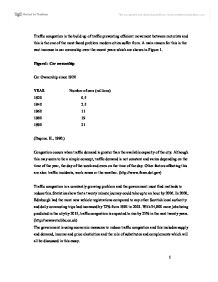 Traffic congestion is the build up of traffic preventing efficient movement between motorists and this is the one of the most faced problem modern cities suffer from. A main reason for this is the vast increase in car ownership over the recent years which are shown in Figure 1.

Congestion occurs when traffic demand is greater than the available capacity of the city. Although this may seem to be a simple concept, traffic demand is not constant and varies depending on the time of the year, the day of the week and even on the time of the day. Other factors affecting this are also: traffic incidents, work zones or the weather. (http://www.fhwa.dot.gov)

Traffic congestion is a constantly growing problem and the government must find methods to reduce this. Statistics show that a twenty minute journey could take up to an hour by 2006. In 2000, Edinburgh had the most new vehicle registrations compared to any other Scottish local authority and daily commuting trips had increased by 72% from 1981 to 2001. With 34,800 more jobs being predicted in the city by 2015, traffic congestion is expected to rise by 25% in the next twenty years. (http://newsvote.bbc.co.uk)

The government is using economic measures to reduce traffic congestion and this includes supply and demand, income and price elasticities and the role of substitutes and complements which will all be discussed in this essay.

In the recent past and in the current situation the relationship between supply and demand has been one-sided in many European countries, in the sense that demand for transport has outstripped the governments plans to reduce traffic congestion.

Demand for transport such as road freight facilities (contributing to traffic congestion) can also be seen as a derived demand as it is usually derived from another function.

For example, a company producing books sees transport as a method of moving the goods from the factory/warehouse to the store. Therefore, as demand for goods increases so does the demand for transport facilities which causes an increase in traffic congestion.

Methods to decrease the demand for transport would include increasing the price of fuel making it more expensive to travel which therefore forces motorists to use substitutes such as public transport.

The government could also hold limits on companies with the amount of miles travelled per month. Incentives would help them travel more efficiently and making each delivery more worthwhile.

The supply of transport is based on many levels and these include: governments; private enterprise concerns; manufacturing concerns; and individuals.

If transport facilities can be easily converted from one use to another, this could reduce traffic congestion. For example, the government could fund in the supply of vehicles which are able to convert from a passenger to freight use vehicle, making supply more elastic than in the current situation where the transfer of equipment is expensive, difficult or impossible.

For the government to fund in this would benefit more the long run time scale rather than the short run. Take the shipping sector where the conversion of tankers to other uses will not help short term inelastic supply but in the longer run supply will be more elastic as it becomes more financiable in real terms for the  to convert the tankers.

Passenger’s income is fairly elastic to the amount they consume in goods ands services. Therefore, with an increase in income; people usually spend a larger quantity of it and less of it if income has decreased. Therefore, more disposable income leads to more holidays (both business and leisure travel) increasing the traffic congestion. But if the government increased inflation rates or income tax, this would lead to a fall in consumers disposable income and so less travelling therefore contributing to a reduction in traffic congestion.

The Governments plans to increase petrol prices on top of concerns over the environment have lead to motorists switching from their cars to buses. A survey which was carried out recently by the Transport Infrastructure Company showed that 30% of motorists saw the rising fuel prices as a reason to reduce the use of their cars which means the price elasticity of demand for fuel is fairly elastic as a percentage change in price leads to a percentage in the quantity demanded.

"It is encouraging to see that so many people are looking at bus travel as a viable and greener alternative to the private car." Trueform Technical Director - Jonathon Morley. (http://www.which.co.uk)

Substitutes are another factor to help reduce traffic congestion to ensure that motorists have many other options available to travel around from A to B. Local councils together with the government aim to build on the public transport side and also to provide better facilities for cyclists and pedestrians. (http://news.bbc.co.uk)

The government is trying to change consumer’s behaviours through 'travel plans' where schools and workplaces are receiving government advice on how to cut down the use of cars. Workplace travel plans have so far reduced driving by 30% through improvement of cycling facilities, dedicated bus services, car sharing or restricted parking.

From a recent survey it was found that 47% of the public thought cheaper public transport would be a solution to traffic congestion.

Improving efficient methods for people to travel provides them with more options over transport such as cars which heavily contribute to traffic congestion.

Working closely with the local government can provide a framework in order to improve paths for pedestrians such as reallocating road space to pedestrians through widening pavement, keeping a daily maintenance of footpaths, providing more pedestrian crossings, providing more direct and convenient routes for walkers or reducing the waiting times at traffic signals and allowing pedestrians to have priority to support more walking.

Cycling is another substitute on offer and local authorities together with the government can help boost this by increasing the provision of secure parking for bikes, maintaining cycle lanes to avoid hazards for cyclists or even to establish a local strategy for cycling as part of their local transport plans.

Buses are already the workhorses of the public transport system but increasingly the government is making this the focal point of an efficient transport system that gets people where they want to be and in reasonable time without having to rely on cars. To further boost this method of travel the government can improve buses by providing newer, higher quality and more accessible buses, increase the amount of bus services being run per day or even improve on the security on buses by installing cameras to monitor the passengers and to reduce crime.

Trains are the other form of public transport which could help in reducing traffic congestion. But like in other forms of transport, there is always room for improvement and in this case: the government can fund in more staff training schemes to improve customer services; allowing passengers to have a stronger voice so that their opinions can be heard; increase the connections between train stations enabling more travellers to travel on this form of transport; or offering lower fares for the elderly or young as an incentive to take the train.

(Department of the Environment transport and the Regions, 1998.)

Factors to help complement the reduction of traffic congestion as well as improved public transport are those such as road charging, tolling and pricing or simply road information for motorists. All those factors will help the government reduce traffic congestion in each of its own way. A recent survey by "Which" showed that 12% thought the introduction of congestion charges would help to lessen congestion. The Transport Secretary, Douglas Alexander, also proved in favour of this idea and announced new plans for these schemes to be introduced. Congestion schemes in London are already introduced and by next February 2007 the congestion zone will even be extended. (http://www.which.co.uk)

Congestion pricing or tolls for road use should be introduced to all the big cities and the major routes linking each of these. Fees are even assessed electronically to eliminate any delays that may be associated with manual toll collection facilities.

Real time travel information is information that the government could also fund in to provide motorists in order to help them choose the most efficient route to their destination. The government should introduce this so that the information can be accessed easily by all motorists to help keep them updated about any accidents, traffic jams to aid travel time predictability and most importantly to reduce congestion.

Overall, the government must act fast on reducing traffic congestion for the following reasons:

(Organisations for Economic co-operation and development, 1973.)

“This country is quite small…The transport solutions of the future cannot be to pour concrete over large parts of England’s green and pleasant land.” (Docherty. I, Shaw. J, 2003.)

However, motorists are still sceptical over road pricing as they fear it would be ineffective and used as another form of tax on motorists. Drivers saw improving public transport as a more effective method than road pricing.

But the study also showed that the public supported the principle of road pricing as 62% agreed that it is fair for those who drove to pay more. Nevertheless, this still doesn’t change the fact that people still need to be convinced by road pricing and so the government must address people’s concerns about how the scheme would work and how the money raised would be spent. Still, the government must still carry on improving public transport as an alternative to cars. (http://www.which.co.uk)

“Developing an integrated transport policy represents a major shift in direction. We don’t just want to stop traffic problems getting worse; we actually want to make things better for people and goods on the move.” John Prescott, 1997.

(Department of the Environment, Transport and the Regions, 1998.)