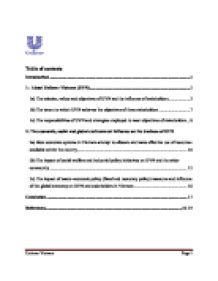 Table of contents Introduction 2 1: About Unilever Vietnam (UVN) 2 1a) The mission, values and objectives of UVN and the influence of stakeholders 3 1b) The extent to which UVN achieves the objectives of three stakeholders 7 1c) The responsibilities of UVN and strategies employed to meet objectives of stakeholders 8 2: The economic, social and global environment influence on the business of UVN 2a) How economic systems in Vietnam attempt to allocate and make effective use of resources available within the country 10 2b) The impact of social welfare and industrial policy initiatives on UVN and the wider community 12 2c) The impact of macro-economic policy (fiscal and monetary policy) measures and influence of the global economy on UVN and stakeholders in Vietnam 16 Conclusion 17 References 18-19 Introduction Unilever is a multinational corporation found in 1930 by the amalgamation of operations of British soap maker Lever Brothers and margarine producer Margarine Unie. The headquarters of Unilever's corporation are in London and Rotterdam. Unilever has a deep root in local cultures and market around the world with a range of product such as OMO, Comfort, Vaseline, Hazeline, Ponds, P/S, Signal, Close Up, AXE, Rexona, Vim, Cif (Jif), Sunsilk Co-Creations, Sunlight, Surf vv. Unilever's main competitors are included P&G, Nestl�, Kraft Foods, Mars Incorporated, Reckitt Benckiser and Henkel. Unilever has started operation in Vietnam since 1995 and currently operating at Ha Noi, Cu Chi, Thu Duc and Bien Hoa industrial park. Unilever Vietnam owns more than 300 distributors and over 150000 retails outlet nation wide. It employs more than 8000 people with a total investment around 120 millions USD in two companies: Lever Vietnam - specializing in Home and Personal Care products and Unilever Bestfoods & Elida P/S - in Foods, Tea and Tea-based Beverages. Unilever not only do business well, but it also plays an important role in social activities, which has improved a quality of life for millions of people in Vietnam. ...read more.

External stakeholders * Government * Community * Pressure group - UVN has to abide by the laws when doing business. - UVN fulfils the tax payment duty on time. - Do not pollute the environment - Ensuring the rights of labors - UVN always updates the Vietnam law. - UVN continues to fulfill the tax payment on time. - Applying new technology in waste treatment - Doing well in social welfare Nghe� I - EXPLAIN HOW ECONOMIC SYSTEM ATTEMP TO ALLOCATE AND MAKE EFFECTIVES USE OF RESOURCES AVAILABLE WITHIN VIETNAM Each nation has a particular economic system. Generally, there are three economic systems that most of the countries around the world using are command economy, free market economy, and mixed economy. However, each one has its strength and weakness. Specially, in Vietnam, the economic engine had to reform to get rid of obsolesent economic system. Witnessing the success of Soviet Unions in growth of economy, before 1986, Vietnam followed Soviet Unions to apply the command economy and it received initial achievements. After a time, this economic pattern showed the weaknesses and serious gaps. One of the most outstanding gaps is incapable of allocating and making use of resources available effectively. This economic system set obstacles to integrate in world's economy and it was also a barrier for Vietnam's development. ''In 1986, the Sixth Party Congress introduced significant economic reforms with free market economy elements as part of a broad economic reform package called "d�i moi" (Renovation), resulting in a Socialist-oriented market economy. Private ownership was encouraged in industries, commerce and agriculture''. To do well this renovation, Vietnam has focused on three important resources including human resource, nature resource and capital resource. (Source: http://en.wikipedia.org/wiki/Vietnam#Economy_and_foreign_relations) Like other contries, human resource plays an important role in the economy. Human is central of all activities. Vietnamese labour is young, plentiful and diligent. However, 86% labour of Vietnam is unskilled. ...read more.

The government expenditure is 115,900 billion VND, equal to 6.9% GDP, increasing 28,600 compare to expectation." (Source: http://www.taichinhdientu.vn/Home/Thu-chi-ngan-sach-Nha-nuoc-nam-2009-deu-vuot-du-toan/200911/70789.dfis). In 2009, total investment was 704,200 billion VND that increases 15.3% compare to 2008. In 2009, total FDI invested Vietnam reached to 21,48 billion $, there were 839 projects registered. (Source: http://tintuc.xalo.vn/00586566928/fdi_vao_viet_nam_nam_2009_dat_21_48_ty_usd_bang_30_nam_2008.html). The government also improves the infrastructure, builds more schools and hospitals, and increases the living condition. This policy can lead to the increasing of GDP in recent year. In 2009, GDP increased 5.32%. Secondly, we consider about monetary. In 2009, state bank supported 4% for enterprises. It encourages the enterprises to import products. Since May 1st, 2010, the government decreased rate interest for borrowers at 0.5% or 1%. The government performs the monetary policy to decrease 25% the interest rates and increase the money supply. The basic interest rate was increasing from 7% to 8% in 2009. However, the government must control the supplying money because it can cause the inflation. The CPI in 2009 increased 0.24% compare to 2008. With a loosening of monetary policy and implement the economic stimulus of Government that increases the credit growth. (Source:http://www.vietnamplus.vn/Home/Thay-doi-chinh-sach-tien-te-Linh-hoat-va-than-trong/20102/33961.vnplus) Although many policies are carried out, totally, the economic speed rate in Vietnam is low that makes the consume low, too. The Trade law still has many shortcomings. Government puts a high tax on luxury goods that Unilever Vietnam is producing such as skin cream; shower cream ... Besides, the population and family planning policy in Vietnam makes the population structure older which is not an advantage of Unilever Vietnam. In a situation of supply is more than demand, there is a severe competition in Vietnam's market. That is a challenge for Unilever Vietnam and the stakeholders. CONCLUSION In general, Unilever Vietnam is a famous brand name in Vietnam because of good business operation and contributions for social activities. However, with a complex fluctuation of World's economy and Vietnam's economy, there will be a lot of challenges and opportunities for Unilever Vietnam in the next years. ...read more.