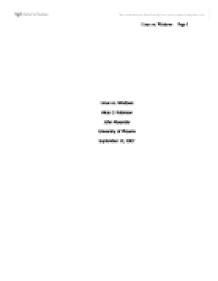 Linux vs. Windows Alicia C. Robinson John Alexander University of Phoenix September 12, 2007 The debate on Windows vs. Linux is truly at forefront with corporations today. Regardless how one may come to this juncture one is usually a UNIX supporter or a customer of Microsoft's operating system and products who are grateful for products of Microsoft. In the following paragraphs their will be comparisons of the advantages and disadvantages of these different systems. There will be a brief description on the cost of these products, what kind of market-share these two systems hold, the availability of application software, and the different types of Hardware needed. There will also be a brief description of functionality, performance, File System Comparisons, and the Security that comes with these products. When one start breaking down different aspects of Linux and Windows one can see how each product is capable of fulfilling the requirement. One system maybe bests for one situation the other for another situation. It is important for a business to understand the needs that it will be fulfilling with each of these operating systems. Today hardware prices have significantly dropped allowing the purchase of an average desktop to be $300 estimate and server to be $1199. The Linux operating system requires very little hardware resource for its desktop and server as opposed to Windows. But with low hardware prices the playing ground has been leveled therefore, hardware is not much of an issue. ...read more.

What mostly came out of the report was that Linux had just as much if not more vulnerabilities as Microsoft. Microsoft also handled and resolved vulnerabilities within 25 days where Red Hat took about 57 days. Microsoft Windows Operating Systems are more accessible than the UNIX/Linux Operating Systems to the general public, because Microsoft has created a monopoly in favor of its products in the global PC market. Most of today's users grew up on Windows so they are familiar with it. Industry seems to be pleased in using Windows for their low end systems, but for high-end more critical systems the marketplace seem to be leaning towards Linux systems. The Linux system is more reliable and less prone to breakdowns and crashes. Linux possesses much greater processing power than Windows. Microsoft has over 90% of the desktop market. (http://www.e-janco.com/PressRelease/press_release20070907Browser.htm, 2007) Linux has not quite made it to the desktop market mainly because it is not as easy to use as Windows XP or Vista. Installing applications on Windows XP or Vista is easy and consistent as opposed to installing applications on Linux. Depending on which distribution of Linux is being used the install process varies. (http://www.michaelhorowitz.com/Linux.vs.Windows.html, 2007) There are also more third party applications for the Windows XP and Vista operating systems then there is for Linux. Today over 50 percent of web servers are running Apache. The Apache server is primarily ran on the Linux operating system. ...read more.

The preferred system will be Windows desktops over Linux desktops. The reason why the Windows operating system was chosen is because of third party application support. There will be several applications that the students will need in order to complete some of the assignments. These applications are not supported in the Linux environment. Another reason why the Windows operating system was chosen was because the school uses Microsoft's Exchange email server and there isn't an email client for Linux that plugs into the Microsoft's Exchange email system for clients to retrieve email. Smith Systems Consulting virtual organization has a web site that uses FrontPage extensions. FrontPage is a website editor made by Microsoft. There are certain publishing and development features in the software that can only be utilized if the server sites' are designed for and has FrontPage extensions available. (www.thehostingnews.com/xs-unix-dedicated-servers.html, 2006) Even though there is support for Linux, FronPage and its extensions were originally designed for Windows server. There maybe certain compatibility issues with Linux servers and the FrontPage extensions. The final verdict is that it is preferable to use a Windows server for Smith Systems Consulting Company. In conclusion we certainly cannot deny the importance of Linux as an option for servers. Large Corporations such as IBM have allocated important resources on this operating system to gain ground in the sand of IT. Nevertheless, in light of studies, many myths that circulate about Linux are simply that, myths. In fact, they demonstrated that Windows is a mature and stable option for high-performance servers, and its total cost is comparable with Linux' costs. It is without including the intrinsic facility of utilizing Windows. ...read more.