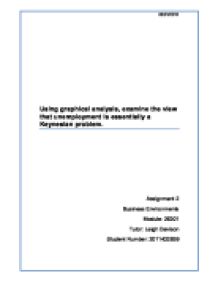 Using graphical analysis, examine the view that unemployment is essentially a Keynesian problem

Using graphical analysis, examine the view that unemployment is essentially a Keynesian problem. Assignment 2 Business Environments Module: 26301 Tutor: Leigh Davison Student Number: 2011432859 John Maynard Keynes was an economist and political philosopher who was remarkably made famous overnight with his 1919 book, "Economic Consequences of the Peace" where he predicted that Germany would escalate the Second World War because of hyperinflation. (Baumol et al, 1997, p530). He is well known for his masterpiece published in 1936, "The General Theory of Employment, Interest and Money" on which most of modern macroeconomics is based upon. In this book, he argues that full employment was not a natural phenomenon, and that employment levels are determined by the spending of money and not by the price of labor as suggested by neoclassical economists. The matter of unemployment is a macroeconomic problem that has the most severe impact on individuals. Most people rely on their income from labor to maintain or even increase their living standards but also a sense of their personal achievements. The loss of a job would mean lower living standards and often a fall in their self-esteem. ...read more.

Unemployment levels have typically increased to 3 million when the economy enters a recession. If the suspected double dip recession is to occur, the unemployment rate can be expected to reach 3 million. Figure 2 Keynesian unemployment can be reduced by the use of demand side policies and implementing loose monetary and expansionary fiscal policies to boost effective aggregate demand. Measures in pursuing expansionary fiscal would involve increasing government spending and cutting taxes (e.g. VAT cut from 17.5% to 15% in 2008). A cut in taxes would increase consumer disposable income, resulting more goods and services demanded. If there is spare capacity in the economy, an increase in aggregate demand will favorably increase Real GDP. A higher production rate amongst organizations will mean higher demand for workers and therefore lower cyclical unemployment (Grant et al, 2005). The effectiveness of implementing fiscal measures depends on other components of aggregate demand, for example reducing taxes may not see an immediate increase on consumer spending if consumer confidence is low. The fiscal policy may also have time lags where a decision to increase government spending may take a long time to have the desired effects on increasing aggregate demand. ...read more.

Demand deficient unemployment will still exist, since a fall in wages would be falling towards the equilibrium wage, yet equilibrium is also decreasing and equilibrium will never be reached. This Keynesian view on unemployment contrasts with the classical view on unemployment. The Keynesian view focuses on the demand side policies to reduce the demand deficient unemployment, which will occur during a recession. On the other hand, the classical view focuses on supply side policies to reduce real wage unemployment. Classical unemployment "exists when the real wages are kept at such a high level that demand for labor is greater than the supply of labor" (Anderton, 2006). Both cases of unemployment occurs when the market is in disequilibrium, yet classical economists put emphasis on supply side factors as the main cause of unemployment such as the power of trade unions, the quality of education and training etc. They also argue that cyclical unemployment only exists in the short run and that market forces will automatically restore the issue. Yet in practice, this rarely occurs and with aid of government intervention, the recession period can be shortened thus reducing unemployment at an earlier stage. ...read more.