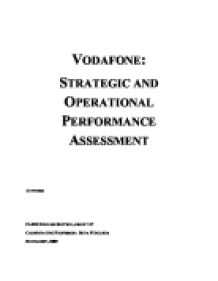 VODAFONE: STRATEGIC AND OPERATIONAL PERFORMANCE ASSESSMENT AUTHORS: FABIZ ENGLISH SECTION, GROUP 137 COORDINATING PROFESSOR: IRINA PURCAREA BUCHAREST, 2009 TABLE OF CONTENTS 1. INTRODUCTION 2. PROCESS MANAGEMENT 3. STRATEGIC LEVEL ASSESSMENT 4. OPERATIONAL LEVEL ASSESSMENT 5. FUTURE PROSPECTS 6. ANALYSIS AND CONCLUSIONS 7. REFERENCES 1. INTRODUCTION In a world where speed, technology and continuous development govern corporations and individuals, as well, we conducted a research on one of today's largest companies and, in the same time, one of the pioneers in the mobile telecommunication field. This area has encountered a fast enlargement, especially during the last two decades, leading to an increase in the number of competitors on global and local markets and, thus, adding value to these services through superior quality and innovation. Vodafone Group Plc is the world's leading mobile telecommunications company, with a significant presence in Europe, the Middle East, Africa, Asia Pacific and the United States through the Company's subsidiary undertakings, joint ventures, associated undertakings and investments. In its 12 years of activity, Vodafone Romania has significantly contributed to the development of the business environment, through major investments at a national level, mainly oriented to launching new products and communication services, expanding 2G and 3G networks, enlarging the number of stores within the country and, also, sustaining social programs to help the community. Vodafone is Romania's second largest mobile phone network operator and it was launched in April 1997 as the first GSM network in the country. Until October 2005, it was known as Connex, after which it was rebranded Connex-Vodafone and in April 2006, the Connex name was dropped, the operator being simply known as Vodafone Romania, aligning itself with the global Vodafone brand. Throughout this project, we will emphasize the company's internal assessments, at the organizational and strategic levels, as well as how the process management is approached and, in addition to this, we will present the management's vision towards the future of the business, followed by an analysis of the business and its performance on the Romanian market and some brief conclusion over Vodafone's activity in Romania and globally. ...read more.

According to a ranking published by Capital Magazine, in 2008 the corporation was the 10th most profitable enterprise in our country, with a turnover of �4,374,448,371 and a net profit of �1,128,555,797. In order to monitor its performance against budgets and forecasts, Vodafone utilizes a number of key performance indicators, which are listed and defined in the table below. KPI Definition Proportionate Mobile Customers (PMC) The proportionate customer number represents the number of mobile customers in ventures which the Group either controls or in which it invests, based on the Group's ownership in such ventures. Service Revenue Service revenue comprises all revenue related to the provision of ongoing services including, but not limited to, monthly access charges, airtime usage, roaming, incoming and outgoing network usage by non-Vodafone customers and interconnect charges for incoming calls. Total Communication Revenue Comprises all fixed location services revenue, data revenue, fixed line revenue and other service revenue. Average Revenue Per User (ARPU) Service revenue excluding fixed line revenue, fixed advertising revenue, revenue related to business managed services and revenue from certain tower sharing arrangements dividend by average customers. Earnings Before Interests, Taxes, Depreciation and Amortization (EBITDA) EBITDA is operating profit excluding share in results of associates, depreciation and amortization, gains/losses on the disposal of fixed assets, impairment losses and other operating income and expense. Table 2: "Operational Key Performance Indicators of Vodafone" In May 2009, Vodafone Romania announced its key performance indicators for the financial year 2008/2009, ended on March 31, 2009, as reported by Vodafone Group Plc. The company registered 667,212 net additions for a total of 9,588,065 customers and, as compared to 2007/2008, Vodafone Romania increased its closing customer base by 7.5%. Postpaid customers accounted for 38.3%, incurring a 14.6% growth year on year, and prepaid for 61.7% of the corporation's total customer base. According to the same annual report, the service revenue increased by 1.4%, reaching a total of �1,113,000,000, while the total communication revenue ranged �1,166,000,000, representing an upturn of 0.7% as compared to the previous financial year. ...read more.

Vodafone supports in-market consolidation, such as the recent agreement to merge the Australian assets of Vodafone and Hutchison 3G Australia to form a 50:50 joint venture. 6. ANALYSIS AND CONCLUSIONS "Welcome to Vodafone! How can we help you?" It's what the kind voice tells you when you call Customer Service. They help you in every way they can and give the best possible solution to your problem and answer to your question. In our personal view, Vodafone is one of the companies that have truly understood the purpose of making business and how to achieve it. They show that they know that what's best for the customer it's even better for the company and its numbers, and the fact is shown by the excellent feedback the corporation receives on the forum and in its suggestion box. Only 20 years old, the Group is now worldwide expanded, which is an amazing achievement. Sustained by the continual developing technology, Vodafone has made its way to reaching its old stated vision of becoming the world leader. Furthermore, the company has succeeded in keeping up with the technological developments and even being one step ahead of the competition. Nevertheless, the key success factor is, in our view, the ability of self-assessment on every single level, strategic, financial and operational treated as most important. Another area of great attainment is Vodafone's Corporate Social Responsibility department. The Group does not treat corporate responsibility as a gesture or add-on - it is part of its core business and helps it accomplish sustainable business success. The company's approach to CR is to engage with stakeholders to understand their expectations on the issues most important to them, and to respond with programmes and targets, and to communicate regularly and transparently on progress. Essentially, Vodafone cannot be judged for any wrong decision or approach. As overestimated or glorified as it might sound, it's the perfect company from any angle you look at it, and it serves as a perfect example and role-model for any new-born company in the telecommunication industry or any other. 7. ...read more.