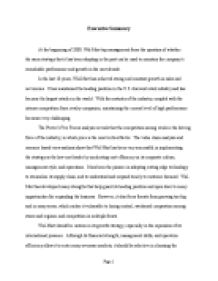 ﻿Executive Summary At the beginning of 2009, Wal-Mart top management faces the question of whether the same strategy that it has been adopting in the past can be used to maintain the company?s remarkable performance and growth in the next decade. In the last 10 years, Wal-Mart has achieved strong and constant growth in sales and net income. It has maintained the leading position in the U.S. discount retail industry and has become the largest retailer in the world. With the maturity of the industry, coupled with the intense competition from rivalry companies, maintaining the current level of high performance becomes very challenging. The Porter?s Five Forces analysis reveals that the competition among rivals is the driving force of the industry, in which price is the most critical factor. The value chain analysis and resource based view analysis show that Wal-Mart has been very successful in implementing the strategy as the low-cost leader by inculcating cost efficiency in its corporate culture, management style, and operations. It has been the pioneer in adopting cutting edge technology to streamline its supply chain, and to understand and respond timely to customer demand. Wal-Mart has developed many strengths that help guard its leading position and open door to many opportunities for expanding the business. However, it also faces threats from growing too big and in many areas, which makes it vulnerable to losing control, weakened cooperation among stores and regions, and competition in multiple fronts. Wal-Mart should be caution in its growth strategy, especially in the expansion of its international presence. Although its financial strength, management skills, and operation efficiency allow it to enter many overseas markets, it should be selective in choosing the destinations. Wal-Mart can focus on emerging markets where customers are price sensitive such as China and India in Asia. In Latin America, it should focus on Mexico and a few key markets that it previously achieves success. ...read more.

The facts that employees have high degree of autonomy and the company offers ?open door? policy and great promotion opportunities create a very unique culture of Wal-Mart. While this culture is unusual in large retail organizations, it adds values to the value chain by creating a good working environment for employees to devote to their jobs and best serve their customers. The low wage, on one hand, allows the company to keep price low; on the other hand, it exposes the company to employee abuse issues and criticisms from interest groups. Technology integration. Technology integration is one of the primary focuses of the company because of its vital role in the company?s success. Technology has helped integrate Wal-Mart?s entire supply chain so that each stage of the value chain is very effective and efficient, which allows it to promptly offer the right products at low prices to its customers. Procurement. Wal-Mart deals directly with manufacturers, and purchasing is centralized at headquarter. It requires manufacturers to cut their margin and meet its employment policies. It also has close collaboration with its big suppliers such as P&G to facilitate inventory control. All of these practices have enabled Wal-Mart to buy its inputs at the lowest cost and to save inventory holding costs, which allow it to offer low price products. Primary activities: Inbound logistics and outbound logistics. Wal-Mart has superior logistics system. It adopts the concepts of distribution centers and ?hub and spoke? arrangement. This is very effective for keeping the inventory level at each local store low and reducing transportation cost. While other retailers rely on either suppliers or 3rd party logistics companies, Wal-Mart is quite independent from outside logistics companies. It also takes control of import logistics from overseas suppliers. In addition, it always strives for cheaper, faster, and more reliable logistics systems by implementing methods such as cross docking systems and remix systems. These practices not only help Wal-Mart reduce expenses but also give it more control and flexibility in handling purchases. Operations. ...read more.