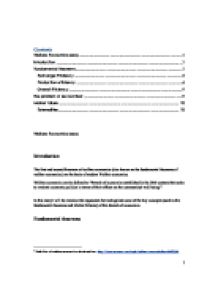 Welfare Economics. In this essay I will be examine the arguments for and against some of the key concepts (such as the fundamental theorems and Market failures) of this branch of economics.

Contents Welfare Economics essay 2 Introduction 2 Fundamental theorems 2 Exchange Efficiency 2 Production efficiency 7 Overall Efficiency 10 The problem of second Best 10 Market failure 11 Externalities 11 Welfare Economics essay Introduction The first and second theorems of welfare economics (also known as the fundamental theorems of welfare economics) are the basis of modern Welfare economics. Welfare economics can be defined as "Branch of economics established in the 20th century that seeks to evaluate economic policies in terms of their effects on the community's well-being".1 In this essay I will be examine the arguments for and against some of the key concepts (such as the fundamental theorems and Market failures) of this branch of economics. Fundamental theorems The first fundamental theorem of welfare economics (the direct theorem) states that under certain assumptions a state (i.e. an allocation of goods and factors) resulting from a competitive equilibrium is Pareto optimal; There are three conditions required for first theorem 1. Efficient exchange 2. Efficient allocation of the factors of production and, 3. Overall efficiency. Exchange Efficiency For exchange efficiency we must consider a pure exchange economy where two consumers A and B are given endowments of two goods 1 and 2. Individual A's indifference curve We assume that good 1 and 2 are both desirable goods hence both individuals which to maximize their utilities (measured by indifference curves Ua1, U2, U3) relative to their budget constraint. The further out the indifference curve the more utility the individual gets. ...read more.

Additionally we can plot all the points on the contract curve to construct a production possibility frontier (PPF). Illustrated PPF Good 1 All the points on the PPF represent the maximum amount of good one that can be produced relative to good 2. Any point outside PPF is unattainable and any point inside are inefficient. Overall Efficiency Overall efficiency is achieved when both production and exchange efficiency are attained simultaneously. For this to happen MRS must equal MRTS and this would occur when the PPF is just tangential to the consumers indifference curve. One of the major shortcomings of the first theorem is that there is no unique optimum. Anywhere on the ppf is optimal. The problem of second Best Attaining a Pareto optimal state would be desirable because it would mean that resources in the economy are allocated in the most efficient way possible given the demand of society. The first theorem gives and argument for free-markets1 However, there are factors such as monopolistic power and externalities (market failure) which make obtaining the conditions required for Pareto efficiency impractical. So given that the first best condition cannot be achieved should we then put in place a system whereby a second best allocation based on the rules of first best is achieved? 'In principle this can be done via taxation/subsidies such that all necessary conditions can be fulfilled and a first best can be achieved'.5 However according to the theory of second best the answer is no. ...read more.

Hence there is the possibility of a Pareto improvement. If the firm were to produce this extra unit and sell it at any price lower than p2 but greater than MC both consumer and producer are made better off hence a Pareto improvement has occurred. The problem however is that monopolist firms can't produce at a price lower than the market price as it has to take into account the effect of increasing output on the revenue received from the inframarginal units. This means that in order to sell an additional unit at less than market price it would have to lower the price of all of its other units it currently sells. Deadweight loss p2 P1 MR Q2 Q1 So what we have is an area on are graph where consumers are willing to pay more for a unit of output than it costs to produce it however this unit is not being produced therefore it is inefficient as we know a Pareto improvement can take place. This area is shaded in red above. Deadweight loss p2 P1 MR Q2 Q1 One solution to this problem is regulation. If the monopolistic firm can be forced to sell where price is equal to marginal cost then the deadweight loss is minimised. However this would need to the regulator to identify the marginal cost of the firm and if this must be attained by the firm itself they might say that their marginal cost is much higher say at MC2 than what it actually is and hence they end up paying the same monopolistic price of P2. ...read more.