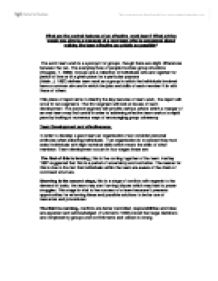 What are the central features of an effective work team? What advice would you give to a manager of a new team who is concerned about making the team effective as quickly as possible?

What are the central features of an effective work team? What advice would you give to a manager of a new team who is concerned about making the team effective as quickly as possible? The word team work is a synonym for groups, though there are slight differences between the two. The everyday lives of people involves group situations (Douglas, T, 2000). Groups are a collection of individuals who are together for period of time or in a given place for a particular purpose. (Adair, J, 1987) defines team work as a group in which the individuals involved have a common aim and in which the jobs and skills of each member fit in with those of others. This piece of report aims to identify the key features of team work,, the report will occur in two segments. The first segment will look at issues of team development. The second segment will provide various advice which a manger of an new team may find useful in order to achieving effective team work at a rapid pace by looking at numerous ways of encouraging group coherency. Team Development and effectiveness. ...read more.

Sub-groups are formed within larger groups. Sub-groups are formed for a number of reasons i.e. comparable traits such as race, age etc. More resources are available to a large group, however these resources may be hard to access due to the size of the group, individuals may become invisible within a large group due to the size, however in a small group these individuals are made visible. (Douglas, T, 2000). * Compatibility - A group may be more cohesive if members share the same interest, background. Though this can help it is also important for the team to have members with different personalities. This creates an opposite affect which can complement the team and provide the opportunity for others to learn form one another. * Permanence of group members - Individuals within a group are more at ease when relationships are formed and when changes are made and are implemented at a slow pace in which they have the time to adapt. Work Environment * Nature of Task - When a task requires individual to liaise on a regular basis the communication process widens, this encourages people to form close nit relationships which leads to high performance. ...read more.

Method of communication used within the group During the preparation for our group presentation, we found ourselves communicating using information and communication technology. The reason for us using this style of communication was because it gave us the possibility to deliver urgent message instantly, over great distances and to a number of people at the same time via a variety of electronic media such as. Mobile phones This method of communication was particularly useful for us as a group because it allowed us to communicate with each other anywhere at anytime. It was highly useful because once the call is made and the call is received on the other side you are sure that the message has been delivered. The mobile phone was an effective way to communicate for us because group members lived in different towns from each other, this helped us to communicate effectively and efficiently wit each other and allowed us to send and receive urgent messages. E-mail We also used E-mail service messaging it gave us the opportunity to communicate immediately with each others via word processed text or images. It allowed us to send large documentations immediately to other member anywhere in the world. Barriers encountered using these methods of communication ...read more.