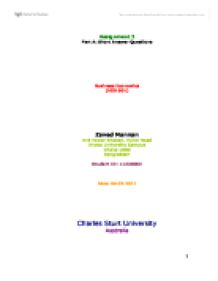 What are the costs and benefits of using fiscal policy to manage an economys short-term and long term growth rates? Discuss.

Assignment 2 Part A: Short Answer Questions Business Economics (ECO 501) Zaved Mannan D-6 Tower Bhaban, Fuller Road Dhaka University Campus Dhaka 1000 Bangladesh Student ID: 11320053 Date: 04.02.2011 Charles Sturt University Australia Answer to Question 1: a. Aggregate demand decreases if interest rate increases. Any increase in interest rates will raise the cost of borrowing, Consumption spending will fall, Investment will fall, International competitiveness will decrease - exports fall, imports rise. Therefore - a rise in the price level leads to lower levels of aggregate demand. b. a fall in the value of the Australian dollar will increase aggregate demand. Answer to Question 2: In 2008, Australia experienced $50b Current Account Deficit (CAD). This CAD was paid by a combination of foreign debts (capital account balance was $46b) and foreign currency reserves ($4b) (McTaggart et al, 2010). Australia always had CAD, but before 1980 these deficits were on average lower and not associated with foreign debt. Australia experienced high CAD in 1980 and foreign borrowings ($20b) were necessary to finance CAD. However, by 1996/7 the foreign debt went up to $190b to cover up deficits. (Brooks & Fuasten, 1998). CAD can be financed in two ways: foreign borrowings and equity investments by foreigners in Australia. ...read more.

However, the automatic tendency of taxes to take away a fraction of each extra dollar of income reduces the size of the multiplier. The cyclical sensitivity of taxes is like a shock absorber that reduces the impact of shocks and helps stabilize the economy (Jinghan, 1998). Automatic stabilizers act to reduce business -cycle fluctuations in part, but they can not wipe out all of the disturbances. Whether to reduce the remaining disturbance, and how, remains the task of discretionary monetary and fiscal policy (Jinghan, 1998). Conclusion The principal purpose of this review was to explain the cost and benefits of using fiscal policy to manage an economy's short-term and long term growth rates. The government has the ability and the responsibility to manage aggregate demand and thus to ensure a continuing growth without inflation. The government can affect aggregate demand with fiscal policies, that is, by changes in government spending or tax rates. Reference: Brooks, R. & Fuasten, D. (1998). Australia's Foreign Debt. In Macroeconomics in the open economy. Addison Wesley Longman, South Melbourne. Krayger, T. (1996). Research Note. Parliamentary Research Service. Retrieved from www.aph.gov.au/library/pubs/rn/1995-96/?96rn40.pdf Harris, N. (2001). Business economics: Theory and applications. UK: Butterworth Heinmann. Jhinghan, C. (1998). Macroeconomics. Mc-Graw-Hill Book Company, New Delhi. McTaggart, D., Findlay, C. & Parkin, M. (2010).Economics, Pearson Australia, 2010. Tregarthen, I., & Rittenberg, L. (2000). Economics (2nd ed.). USA: Worth. ?? ?? ?? ?? 1 ...read more.