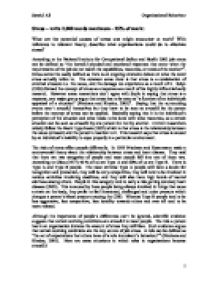 What are the potential causes of stress one might encounter at work? With reference to relevant theory, describe what organisations could do to alleviate stress?

Stress - write 2,000 words maximum - 25% of mark: What are the potential causes of stress one might encounter at work? With reference to relevant theory, describe what organisations could do to alleviate stress? According to the National Institute for Occupational Safety and Health 2002 job stress can be defined as "the harmful physical and emotional responses that occur when the requirements of the job do not match the capabilities, resources, or needs of the worker"1. Stress cannot be easily defined as there is an ongoing extensive debate on what the word stress actually refers to. The common sense view is that stress is a combination of external stressors i.e. the cause, and the damage we experience as a result of it. Selye (1936) formed the concept of stress as a response as a result of his highly influential early research. However some researchers don't agree with Seyle in saying that stress is a response, one major group argue that stress has to be seen as "a function of an individuals appraisal of a situation" (Fincham and Rhodes, 2001)2. Saying that the surrounding events aren't stressful themselves but they have to be seen as stressful by the person before the concept of stress can be applied. ...read more.

These situations are quite hard to solve as the people will always enter new jobs but this can be better solved pushing other employee to socialise more with the new employee so they feel more comfortable in this new environment. If the employee feels more secure in the environment then they will feel less stress. 4) Burnout: This type of stress is caused by people feel like they are in a dead end job where there is little or no chance of promotion. This is the case in some large organisations where there has recently been a shake up of the management or if it has recently been created. It creates new roles which are filled up by young qualified people, after these roles are filled up by the young people there is a small chance anyone lower down will get a promotion for a long time causing them to feel stressed. It was originally seen in nursing roles and other jobs like that. Burnout causes a person to feel emotionally exhausted and have a lack of energy. There are ways in which an organisation can solve this feeling of being locked into a role, they can negotiate career plans which a person doesn't just progress up they also have sideways promotions. ...read more.

They try and smoke cigarettes and drink alcohol or eat a lot of food etc to ease the stress. They try and look at the situation and instead of looking at any potential good points; they will look at what the worst that can happen is. They will also try and deal with it by maybe being violent and damaging property, and loosing their temper etc. This isn't a very good way of dealing with stress and may even increase the problem the person is facing. Research shows that the first two strategies are more effective in dealing with stress and people using those ways experience less physical and psychological damage, as the alcohol and cigarettes do cause considerable amounts of damage to the human body especially when consumed at large amounts. Stress is the outcome of uncertainty high demands and low control. It isn't limited to one or two groups of occupations it arises in a lot of occupations where there is a high demand and not enough control. But there are situations in which stress is more likely to affect people such as in cases of uncertainty. People do develop their own ways of dealing with stress and some are better then others but more and more organisations are hiring consultants to deal with stress management to make people deal with it better. ...read more.