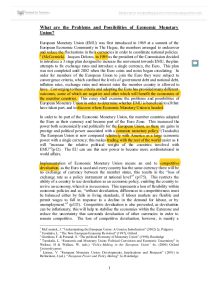 What are the Problems and Possibilities of Economic Monetary Union?

What are the Problems and Possibilities of Economic Monetary Union? European Monetary Union (EMU) was first introduced in 1969 at a summit of the European Economic Community in The Hague, the members arranged to endeavour and reduce the fluctuations in their currencies in order to coordinate national policies. 1 (McCormick). Jacques Delores, in 1989 as the president of the Commission decided to introduce a 3 stage plan designed to increase the movement towards EMU, the plan attempts to fix exchange rates and introduce a single currency, the Euro. This plan was not completed until 2002 when the Euro coins and notes began circulating. In order for members of the European Union to join the Euro they were subject to convergence criteria, which confined the levels of government debt and national debt, inflation rates, exchange rates and interest rates the member country is allowed to have. Converging to these criteria and adopting the Euro has provided many different outcomes, some of which are negative and other which will benefit the economies of the member countries. This essay shall examine the problems and possibilities of European Monetary Union in order to determine whether EMU is beneficial to all that have taken part, and to discover where Economic Monetary Union is headed. In order to be part of the Economic Monetary Union, the member countries adopted the Euro as their currency and became part of the Euro Zone. ...read more.

As there are restricted use of policies such as interest rates, exchange rates and fiscal policies, these economic policies cannot be drawn upon to rescue the economy in times of economic shocks. As this is the case then labour wages and prices have to be used instead. In recent years the "emphasis has shifted to promoting greater flexibility in labour markets and social policies."7 (p175). The EU will have to reform these markets to enable them the flexibility they need for EMU to work. In addition to reforms of the labour and capital markets, the political structure of the EU will have to be amended. Within the EU there are incompatible economies each with their own governing bodies, the EU has a "highly decentralised fiscal policy and even more decentralised political system"8 (p173), without political unification the consequences of EMU will prove extremely difficult for he separate governmental bodies to cope with. Political unification would bring the Eurozone closer to a supranational power as all the decisions involving monetary and fiscal policies would be made at a national level, above the regional governments. This would also reinforce the Eurozone as a greater political power within the world markets. But there is a huge political cost to the member states because if this occurs the member government will be giving up a significant amount of their power. ...read more.

This may cause problems between the member countries themselves when it come to deciding who will join EMU, "The proposed Economic Monetary Union might increase regional disparities that is costly to implement and that it is certain to carry substantial risks, especially in initial stages"14 (p324), this brings up the problems of the implementation costs for any countries wishing to join the EMU, which are substantial for smaller Eastern European countries who are wanting to join the enlarging European Union. There are many positive and negative effects of joining the Economic Monetary Union, which lead to either problems or possibilities for the member countries. Among the problems the most important one to consider when evaluating the EMU is from a political perspective the irreversibility, this is a very costly and uncertain gamble to make when deciding to join the EMU and which needs to be solved before poorer countries can afford to join the larger members. The structure of the labour markets also proves a fairly large problem to the Eurozone as without reforms in these areas the labour market is to inflexible. One of the main possibilities of EMU is the increase in political power the Eurozone will experience, the area within the EMU will be one of the largest single currency areas, and will enjoy all the political benefits from this, The Eurozone will have more influence over larger political power such as America, this has endless possibilities with regards to new policy areas. ...read more.

This essay is informative and well-researched. At my institution (a Russell Group politics department) it would probably receive a 2.1, depending on the syllabus and the level of study).

What prevents this from attaining a better mark is the lack of an overriding structure that facilitates a strong, and internally unified, argument. The points are made in a bit of a scattergun fashion so I didn't get the impression that costs and benefits were particularly well summed against each other.

Indeed, in many cases the good and bad facets of EMU's design are paradoxical aspects of each other, particularly if the political consideration of who benefits is taken into account. The author touches upon these kinds of ideas, but foregrounding them would provide a stronger framework for the author's research and arguments.