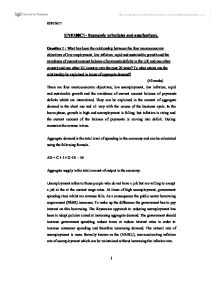 What has been the relationship between the four macroeconomic objectives of low employment, low inflation, rapid and sustainable growth and the avoidance of current account balance of payments deficits in the UK over the past 20 years.

Economic growth is an increase in a countries national income. It is a measurement of a countries output, expenditure or income, all of which should come to the same total. In the UK growth is measured using GDP and GNP. A growing economy means there will be more goods and services available for consumption. Governments therefore would like not only to achieve high long run rates of growth, but also achieve stable growth and avoid recession. Economic growth leads to an increase in resources such as labour and capital. An increase in efficiency, with which these resources are used, through advances in technology, improved labour skills or improved organisation. The distinction between actual and potential growth should be made4; * Actual growth is the percentage annual increase in national output (the amount actually produced). * Potential growth is the percentage annual increase in economy capacity to produce. (The rate of growth in potential output). It should also be noted that high levels of growth tend to result in low levels of unemployment. The balance of payments is a record of one country's trade dealings with the rest of the world. Countries need to pay for all the products that are not domestically produced. They also borrow and lend money abroad or buy property or businesses in other countries. Balance of Payments = Total Exports - Total Imports In terms of Balance of Trade, inflation can have a big impact. ...read more.

This may also shift the Phillips curve to the left, reducing the rate of unemployment for any given rate of inflation. When the Thatcher government came into power one of their main aims was to cut down the marginal rate of income. In 1979 the basic rate of income tax was 33% with higher rates rising to 83%. In 1988 the Thatcher government had managed to cut down the basic rate to 25% and the maximum rate to 40%. There are several benefits associated with the increasing cuts to the marginal rate of income tax including; people work longer hours, more people wish to work, people work more enthusiastically, employment rises and unemployment falls. The model below illustrates the effect of a tax cut on total unemployment. Monetarists emphasize one of the main problems with the natural (equilibrium) unemployment rate as being the safety guard provided by the unemployment benefits. When income tax was cut during the 1980s there was a bigger difference in the after tax wage rates and the unemployment benefits, therefore more of the unemployed became motivated to look for and secure work. Supply side policies implemented in the 1980's by Mrs Thatcher and the Conservative government did not take immediate effect. There seems to be a time lag as these policies can be seen to be making an impact through the late 1990s where unemployment and inflation are simultaneously declining5. However, overall the graph seems to show that inflation and unemployment are opposites. A longer time series of data showing flat or falling inflation and unemployment is required to fully support the supply-side theory. ...read more.