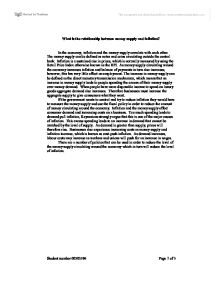 What is the relationship between money supply and inflation?

The monetary policy can also be used to target the level of inflation but mainly it can be used to target the level of growth. It is designed to control the amount of money flowing around the economy (the money supply). It is mainly used to tackle inflation and the balance of payments problems. There are a number of methods that the government uses to affect the money supply. Firstly raising interest rates may reduce the amount of borrowing in the economy. As borrowing is made more expensive the amount of money flowing around the economy is reduced as people would not be able to afford the repayments. Interest rates also affect the value of the pound so the higher the interest rate I the UK international and overseas investors will be attracted to put money into UK banks. To do this they will buy pounds forcing up the value of Sterling. Secondly the government can control the amount the credit financial institutions are allowed to give out. So the government may set limits on the amount and the types of lending banks are allowed to make. ...read more.

So therefore Goodhart is suggesting that if the government tries to restrict the money supply (the problem) then in turn inflation will also need to be treated as a problem. Therefore by targeting the rate of growth of the money supply and by targeting the rate of inflation interest rates, unemployment and borrowing can be bettered. Therefore in conclusion, in using the monetary policy a government should have a clear idea of what the aims of the policy are. What monetary variable it is going to attempt to control and by what means. Whether to take out a long term policy or a short term perspective, and how well the policy fits in with other policies. By assessing these reasons then the government would be able to reach a stable economy which is best achieved by ensuring a steady and low rate of growth in the money supply. So by using the monetary and the fiscal policy correlating with each other then the government would have a much better chance of controlling the economy. This would also be beneficial for consumers and businesses. Student number:00503596 Page 3 of 3 ...read more.