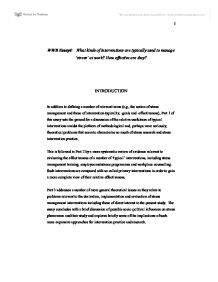 What kinds of interventions are typically used to manage 'stress' at work? How effective are they?

WWB Essay4: What kinds of interventions are typically used to manage 'stress' at work? How effective are they? INTRODUCTION In addition to defining a number of relevant terms (e.g., the notion of stress management and those of intervention-typicality, -goals and -effectiveness), Part 1 of this essay sets the ground for a discussion of the relative usefulness of typical interventions amidst the plethora of methodological and, perhaps more seriously, theoretical problems that seem to characterize so much of stress research and stress intervention practice. This is followed in Part 2 by a more systematic review of evidence relevant to evaluating the effectiveness of a number of 'typical' interventions, including stress management training, employee assistance programmes and workplace counselling. Such interventions are compared with so-called primary interventions in order to gain a more complete view of their relative effectiveness. Part 3 addresses a number of more general theoretical issues as they relate to problems relevant to the derivation, implementation and evaluation of stress management interventions including those of direct interest to the present study. The essay concludes with a brief discussion of possible socio-political influences on stress phenomena and their study and explores briefly some of the implications of such more expansive approaches for intervention practice and research. PART 1 Typical SMIs: Definitions and Issues The term stress management interventions (SMIs) refers to "any activity, program, or opportunity initiated by an organization, which focuses on reducing the presence of work-related stressors or on assisting individuals to minimize the negative outcomes of exposure to these stressors" (Ivancevitch, Matteson, Freedman and Phillips, 1990/p.252). A common scheme for categorizing different types of SMIs distinguishes between primary, secondary and tertiary interventions (Murphy, 1988; Cooper, Dewe and O'Driscoll, 2001). Primary interventions seek to reduce the intensity or number of stressors employees are exposed to, through interventions like job redesign or workload reduction. Secondary interventions aim to help employees cope with existing stressors more effectively, typically through a range of stress management training (SMT) ...read more.

Moreover, what are often considered to be encouraging findings for EAPs may not be very relevant in a UK context as they are based on American studies in the 1970s and 1980s on large alcohol and drug abuse programmes involving mandatory referral (Arthur, 2000; Macdonald, Lothian and Wells, 1997). Only a few such studies relate to more broadly based EAPs in large American organizations as, for example, the McDonnell Douglas study (Alexander Consulting Group, 1989) which is usually quoted as having delivered an estimate of an overall savings to be 4 dollars returned for each dollar spent on EAPs (Berridge, Cooper and Highley-Marchington, 1997, 1997). But, as Masi (1997) points out, while establishing the usefulness of the EAP for the treatment of alcohol abuse this study fail to provide conclusive evidence of the cost-effectiveness of more broadly based EAPs. A review of seven major American broad-based EAP evaluation studies found that despite some encouraging any discussion about whether the benefits spring from the EAPs involved "...could be written off as self-interest by internal providers and as anecdotal writings with a research methodology utilized that has conspicuous limitations" (Cserniak, 1995/p.34). One of the very few UK evaluations of an internal counselling programme was carried out in the Post Office (Cooper , Sadri, Allison and Reynolds, 1990). Findings from 250 employees who had received counselling were compared with a matched control group. Significant declines in sickness absence, clinical anxiety levels, somatic anxiety and depression, and increases in self-esteem were reported. Importantly, however, there were no changes in job satisfaction or in organizational commitment. The Health and Safety Executive in the UK commissioned the Manchester School of Management to carry out the first nationwide, independent study of British EAPs and workplace counselling in nine separate companies (Berridge, Cooper and Highley-Marchington, 1997). After receiving counselling and at follow-up clients reported significantly improved general and work-related mental and physical well-being, compared to before counselling and an unmatched control group. ...read more.

conducted by practitioners themselves, in environments either hostile or entirely inappropriate to host genuine experimental studies, put to the test, in front of diverse and differently motivated audiences, ideas derived from suspect theoretical formulations in an area where the central notion itself (that of stress), threatened both by natural death (as it could no longer deliver) and the suffocation that fan worship can induce, found it necessary to surround itself with quotation marks. Yet, it was argued that the conclusion that typical SMIs are not really effective could be trusted despite the shortcomings of the relevant evaluation research. It is more a case of 'they were never really meant to be particularly effective', rather than one of 'serious doubts about whether they are effective remain'. The main reason for this was the lack of properly explanatory theories in this domain. In fact, to a very great extent we witnessed this domain exhibit almost terminal annihilation as claims of the yesteryear seemed largely unsustainable and greater theoretical acuity led to serious dissatisfaction with extant stress theories and, indeed, the notion of stress itself. Are developments in this field imminent? Unless the more recent work on organizational well-being in terms of specific emotional and other affective states (space limitations did not allow any substantial discussion of these exciting developments; see Briner, 2002) is capable of forcing some nonlinearity soon, it is very unlikely that the current state of theoretical confusion would allow for any substantial further developments either in methodology or in application. Thinking back of the closing paragraph of the last section...one does wonder whether muscle relaxation, the rearrangement of a few patterns of thinking about largely non-political issues or the search for some personalized solution in the context of a 5-session bout of counselling as offered by some EAP were ever destined to be enough to effectively handle the multitude of specific problems generated by the antagonistic elements of that most perennial and inevitably largely conflictual of couplings namely that between employers and employees. ...read more.