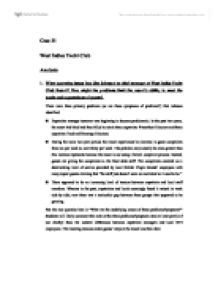 What operating issues face Jim Johnson as chief manager at West Indies Yacht Club Resort? How might the problems limit the resort's ability to meet the needs and expectations of guests?

Case 31 West Indies Yacht Club Analysis 1. What operating issues face Jim Johnson as chief manager at West Indies Yacht Club Resort? How might the problems limit the resort's ability to meet the needs and expectations of guests? There were three primary problems (or are these symptoms of problems?) that Johnson identified: ? Expatriate manager turnover was beginning to become problematic. In the past two years, the resort had hired and then failed to retain three expatriate Waterfront Directors and three expatriate Food and Beverage Directors. ? During the same two-year period, the resort experienced an increase in guest complaints from ten per week to over thirty per week. The problem may actually be even greater than this increase represents because the resort is not using a formal complaint process. Instead, guests are giving the complaints to the front desk staff. The complaints centered on a deteriorating level of service provided by local British Virgin Islands' employees with many repeat guests claiming that "the staff just doesn't seem as motivated as it used to be." ? There appeared to be an increasing level of tension between expatriate and local staff members. Whereas in the past, expatriates and locals seemingly found it natural to work side by side, now there was a noticeable gap between these groups that appeared to be growing. But the root question here is "What are the underlying causes of these problems/symptoms?" Students will likely comment that each of the three problems/symptoms stem at least partly (if not chiefly) from the cultural differences between expatriate managers and local BVI employees. The resulting tensions make guests' stays at the resort less than ideal. ...read more.

It would be difficult to find a culture that would be accepting of reprimanding a senior employee in front of other staff members. Dave Pickering, although not designated as a leader, seems to be exhibiting behaviors that would be effective for an informal leader in many Western cultures. Specifically, Pickering seems to be trying to lead through setting a positive example. Unfortunately, his efforts do not seem to work in this cultural context-an outcome that you should press the class to explain. One possible explanation has to do with the collectivist nature of the local culture. Standing out, or leading by example, is seen as behavior that is deviating from group norms and is therefore looked down upon. The resort's practice of allowing managers like Fitch and Johnson to be at the resort only a limited amount of time could well cause managerial problems regardless of any cultural differences present. Managing from a distance can often make employees feel as though the business is not a priority with off-site managers. In such situations, employees often behave "appropriately" when the manager is around and then revert to "inappropriate" or "normal" behavior when the manager leaves. Class members are likely to propose, perhaps correctly, that the resort's managers should reside on the island and be on-site on an almost daily basis. Although the situation could not be avoided, it is unfortunate that Lucas had such little time to adjust to the local culture and prepare for the coming week. Lucas has also separated himself from the group by not socializing with them during his free time. Expatriate managers often find comfort in speaking with other expatriates but this significantly reduces the chance of understanding the local culture. ...read more.

These cultural profiles could be used as the basis for a cross-cultural training seminar for the resort's existing expatriate managers. It is important that expatriates understand that how the locals behave at work is a reflection of their culture and does not represent attempts by the locals to undermine the management's goals. Thus the focus must be on learning about these differences. Lastly, the resort could consider developing a formal mentoring program that would align new expatriate managers with managers such as Singiser and Mawhinney who have already proved their effectiveness. ? Have Singiser document on a daily basis the problems associated with overbooking-both from an external (guests) and internal (staff) customer perspective. Once the rush period is over, send the documentation to Headquarters and ask Joe Kimball to discuss the issue via a conference call. Epilogue Jim Johnson's contract was not renewed in 1996 and Kent Mawhinney left the resort at about the same time. Mawhinney took a position as the General Manager of Caneel Bay, another Rockefeller Resort managed by Rosewood Hotels and Resorts. Joe Kimball passed away in the late 1990s. In response to these changes at the resort, the Kimball family decided to make Kristin Singiser the new General Manager. Steve Lucas lasted only a few more months in his position and then returned to the United States. Enrik Harrigan left the resort in 1997 and returned home to Dominica. Harrigan now runs his own water sports center for a local Dominica hotel. The resort also welcomed back Bill Jones, the Canadian who had been very successful in managing the water sports center in the past. Jones took the position of Waterfront Director. Under the new management team the resort has been very successful, increasing both room rates and occupancy levels. ...read more.