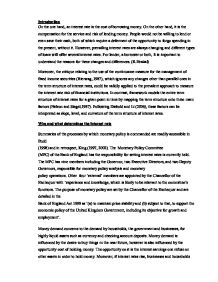 Who and what determines the interest rate in the UK.

The financial information service Bankrate states that any type of natural disaster, volatile government or price shock tends to raise interest rates up, because such events make lenders uncertain about the future. Steady and sustainable growth coupled with low inflation keeps interest rates steady, as well because lenders feel assured about the overall economy and abilities of borrowers to pay back money. In emerging markets, reformers, development economists and steady growth, unite to lower interest rates so that more people can have admission to credit, which ideally adds to new and growth, innovative businesses(Hummel,2011). Nominal payments in the United Kingdom Economists seek to build yield curves from real bonds in order to determine the term structure of real interest rates. Unfortunately, UK index-linked bonds are not pure real bonds. A perfectly indexed bond would pay a nominal coupon, which is equal to the coupon rate announced at the time of issue multiplied by the proportionate raise in the general price index between the issue date and the time of payment. UK index-linked bonds, however, pay nominal coupons equal to the coupon rate declared at the time of issue multiplied by the proportionate increase in the price index from a 'reference level' dated eight months before the bond's issue date to a date eight months previously the coupon payment is made. ...read more.

Some industries are influenced by interest rate changes more than others are. And, some regions of the British economy are also more sensitive to a change in the direction of interest rates. The markets that are most influenced by changes in interest rates are those where demand is interest elastic in other words, market demand accounts for elastically to a change in interest rates. Good examples of interest-sensitive industries include those directly linked to demand conditions in the housing market� exporters of manufactured goods, leisure services and the construction industry. In contrast, the demand for utilities and basic foods is less affected by short term fluctuations in interest rates. (Riley G.,2006) The graph below shows the fluctuations in the demand for money according to interest rate Conclusion The results reported in this paper demonstrate who, what and how interest rate is determinated in the United Kingdom. This essay investigates the interest rate risk of the UK financial and non-financial corporations as measured by the sensitivities of their stock returns to changes in slope, level, and curvature of the UK term structure of interest rates. In addition, it shows a fluctuation in the interest rate and their factors that could affect economic growth. ...read more.