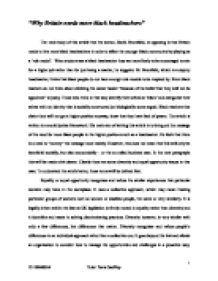 "Why Britain needs more black headteachers" The main body of this article that the author, David Bromfield, is opposing is that Britain needs to hire more black headteachers in order to affect the younger black community by playing as a 'role model'. When students see a black headteacher they are more likely to be encouraged to aim for a higher job rather than for just being a teacher, he suggests. Mr Bromfield, which is a deputy headteacher, thinks that black people do not have enough role models to be inspired by. Even black teachers do not think about climbing the career ladder "because of the belief that they will not be appointed" anyway. Those who think in that way identify their selves as 'black' and categorise their selves with an identity that is socially constructed (or biologically some argue). Black teachers that claim they will not get a higher position anyway, show that they have lack of power. The article is written in a social justice framework. His main aim of writing this article is to bring out the message of the need for more black people in the higher positions such as a headteacher. He feels that there is a need to "convey" his message more widely. ...read more.

In our case here, Mr Bromfield identifies himself as a black man belonging to a black community that he wishes to inspire by his doings. It is arguable that this identity is socially constructed, although he is from a different race. This social construction has been deeply embedded in the minds of people that black people are black people and white people are white. This identity has led to stereotyping, which will lead to r****m. Mr Bromfield claims that there is institutional r****m, which is the main problem why black people are not getting or trying to get to the high position of a headteacher. The House of Commons in their Macpherson Report (2009) define institutional r****m as "the collective failure of an organisation to provide an appropriate and professional service to people because of their colour, culture or ethnic origin. It can be seen or detected in processes, attitudes, behaviour which amount to discrimination through unwitting prejudice, ignorance, thoughtlessness and r****t stereotyping which disadvantages minority ethnic people". Mr Bromfield has intended his article to inspire the young black youth and the wider black community that yet are to face institutional r****m. But also for others (white people) to make a point clear about how the number of black headteachers is dramatically low in comparison to white people. ...read more.

It might bring some new ideas to the field of education that will help develop it. However, it has been mentioned before briefly that it is about social justice. It is not so much a business case as diversity is used as a tool to achieve organisational goals. Otherwise would an organisation invest money in diversity programmes and training sessions in order to make awareness if they would not profit from it? In social justice, it is all about diversity which will make living happier among each other. This article has been written with a strong opinion from the author himself suggesting that there should be more headteachers in the UK, advocating this matter himself as a deputy headteacher. He already assumes that it is well known that there is still r****m in this country regardless the legislation. He is making it clear that there is lack of power from the black community and therefore a stronger force needs to step in order to solve this problem. Although diversity is being embraced and applied in many of today's organisations, constitutional r****m still occurs, and the government seems very cool about it. Mr Bromfield is calling for the black community to rise and become headteachers and role models, but with his simple article he cannot do much. The social construction has led to the fact that a particular group of people have more power than others, and that will stay like this for a long time. ...read more.