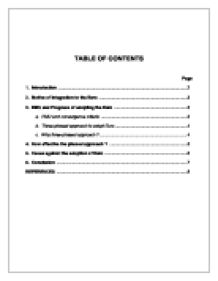 Why did the EU introduced a phased approach to adopt a single currency ? Why did some countries refuse to join the EMU ?

TABLE OF CONTENTS Page 1. Introduction 2 2. Motive of integration to the Euro 3 3. EMU and Progress of adopting the Euro 3 a. EMU and convergence criteria 3 b. Three-phased approach to adopt Euro 4 c. Why three-phased approach ? 4 4. How effective the phased approach ? 5 5. Cases against the adoption of Euro 6 6. Conclusion 7 REFERENCES 8 DISCUSSION QUESTION Why did the EU introduced a phased approach to adopt a single currency ? Why did some countries refuse to join the EMU ? 1. Introduction Europe has become one of the largest economy in the world, and EU by itself is considered as the largest domestic single market, especially after implementing the adoption of single currency (Euro) since 1999 (European Commission 2011). Although there was scepticism about viability of Euro by the time of its introduction, it now creates a stronger presence for the EU in the world arena. Euro is currently being used by over 330 million European and nearly 200 million people of countries have currency pegged to the Euro (Eurunion 2011). The creation of the world's second-largest currency transformed the European economy from the individually economic governance to the united governance with well integration. On the progress of adopting a single currency, EU employed three-phased approach, which is the monetary integration process composed of three steps in their run-up to the euro adoption. The entire process ranges from the preparation for entry to the institution of Exchange Rate Mechanism (ERM) ...read more.

This phase would last for 3 years. The third phase was in effective on January 1st 2002, which maintains the dual currency mechanism. At that time, new euro banknotes and coins were introduced and widely used in parallel with the national denominated currencies. This dual currency system would last for 6 months and on July 1st 2002, national currencies of EMU members lost their legal tender and euro became the sole currency. c. Why three-phased approach ? Changing over to another currency is a radical operation requiring prudent arrangements in order to ensure a smooth transition (Euro Commission 2011). The three-phased approach is the framework from which EU Member States follow in steps through their progress of shifting to the Euro. The first step is the foundation of EMU responsible for observation of the convergence in all aspects mentioned. A salient criterion required by EMU is the member's ability of catching up in terms of GDP per capita and price level convergence (Szap�ry, G. 2000). Second phased approach allows EU Member States to have more time to outline key strategy and assign national steering structure.The fact shows that there was a large differences among members. It took time to satisfy the inflation criterion because inflation is the long-term factor. Beside that, the problem caused by decimalisation as the conversion facilities is unlikely to equally round national prices into euro prices in short term (Bolle M. 2002). In another aspect, both private and public sectors must adapt to new administrative, financial and monetary mechanism, and legislation must be amended accordingly. ...read more.

Adopting euro involves in substantial costs incurred by local firms and banks. It also takes time to fully convergence to the stipulated level. Even with relatively steady convergence, there is no guarantee that euro will be optimal utilized in every corner of the continent. Moreover, European Commission tax revenue only accounts for 1.5 percent of GDP, which sometimes mismatches with the inflationary policy pursued by local countries. Countries are likely to be more vulnerable after being a member of EMU. These are some of plausible reasons make countries reluctant to joining the EMU. 6. Conclusion The objective of this paper is to identify the progress of adopting euro and difficulties facing by its prospect members. Since the first time of its introduction, value of the euro has soared to high level over US dollar, which implies a general good condition of EU against US. By adding more members to the union, EU has created a powerful financial system in terms of quantity and quality. EU also becomes the largest single domestic market compared to US. All the recent figures shows the appropriate strategy employed by EU in the path of strengthening its influential in the global financial system. There still have some challenges facing by EU in order to fully accomplish the absolute integration into one economic entity. These obstacles arise from the lack of comprehensiveness in legislation to induce more EU countries to join the EMU. However, because every countries commiting to the use of euro emphatically concern about price stability and budegetary discipline, this eventually creates a strong union economy and becomes a sturdy foundation to forge the new regulatory framework in the future. ...read more.