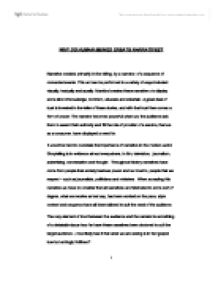 Why Do Human Beings Create Narratives?

WHY DO HUMAN BEINGS CREATE NARRATIVES? Narrative consists primarily in the telling, by a narrator, of a sequence of connected events. This act can be performed in a variety of ways included visually, textually and aurally. Mankind creates these narratives to display some kind of knowledge, to inform, educate and entertain. A great deal of trust is invested in the teller of these stories, and with that trust then comes a form of power. The narrator becomes powerful when we, the audience ask them to assert their authority and fill the role of provider of a service, that we as a consumer, have displayed a need for. It would be hard to overstate the importance of narrative in the modern world. Storytelling is in evidence almost everywhere, in film, television, journalism, advertising, conversation and thought. Throughout history narratives have come from people that society bestows power and our trust to, people that we respect - such as journalists, politicians and ministers. When accepting this narrative we have to consider that all narratives are fabricated to some sort of degree, what we receive as text say, has been worked on the pace, style content and sequence have all been tailored to suit the need of the audience. The very element of trust between the audience and the narrator is something of a debatable issue how far have these narratives been doctored to suit the target audience - how likely has it that what we are seeing is in fact gospel true but achingly fictitious? ...read more.

These are restaurants, service stations, and of course motels. These may seem very uninteresting at first thought but he characterises them and you soon notice a pattern that none of these services are in anything less than strange. He comments on what the service stations were like when his parents used to take him, his brother and sister on holiday when he was younger. From the stories we are told nothing about them seems to have changed, since 'we' met the hotel guest on the cracked leatherette settee, who had only one leg, a caved in forehead and yet could talk to you even though he had no tongue. The exaggeration is effective and amusing but also shows Bryson's darker side of comedy. Throughout the book Bryson characterises the places he stays in as much as the other residents in the town. There is a continuous feeling that the characters that appear in the novel are somewhat subhuman in their actions and you can't help but think that this description is even slightly hyperbolic, or is it a true reality. Through all the 'crappy' places he passes on the way Bryson claims that they are all the kind of place that he thought his Dad would have liked, this hints towards a spiritual journey as well as a geographic one as it was his dads sudden death a few years prior to the trip that provided the impetus for this spatial journey, by this I mean the geographic, and temporal, by this I mean the journey that Bryson takes through his past. ...read more.

While they purport to describe and explain other peoples and cultures, travel accounts often distort those realities. The travellers use the impact of their own home culture to interpret the "other." Travel Writing is a literary form with a threefold character-aesthetic, political, scientific. It depicts the culture in the source, admiring works of art, comparing society at home and abroad and observing the nature of many processes taking place in the society. Travel Writing can serve as a raw material out of which illustrations of indigenous peoples; developments, traditions and events emerge. It is a means of on-the-spot recording. A historical look on Travel Writing discovers strains of literality that can enrich our own conception of cultural encounters. It might even encourage reflection on whether we have left behind the older methods or might better think of ourselves as historical tourists following the paths lay down by previous generations of Travel Writing. With its juxtaposition of scientific and fictional, Travel Writing departs from the conventions of purely scientific. In contrast to science it narrates the story of immediate contact between cultures and can use the resources of literature to invoke the ironies, gaps and misunderstanding in our knowledge. Neither is it a purely literary travel account; rather the genre is considered as something intermediate between scientific and literary, between logical and emotional, between fact and fiction. 1 Michael Bell 'How Primordial is Narrative' in 'Narrative in Culture' ed. Cristopher Nash. London;New York ; Routledge 1994. ?? ?? ?? ?? 1 ...read more.